Bernie Sanders spoke recently at Liberty University. This institution was founded by the late Jerry Falwell in 1971 and is an evangelical Christian college. You can get a good sense of how religion is threaded into every discipline by its statement about its Arts and Sciences curriculum.

All professors are dedicated Christians who affirm students in the faith, challenge them to grow spiritually, and encourage them to evaluate all things from a Christ-centered perspective. Each department is committed to an integration of faith and discipline, showing how Biblical presuppositions and a commitment to Christ govern research and teaching.

One of its ‘science’ departments is the Center for Creation Studies that seeks to promote the “development of a consistent biblical view of origins in our students. The center seeks to equip students to defend their faith in the creation account in Genesis using science, reason and the Scriptures” and of course advocates for young-Earth creationism. Not exactly fertile soil, for a secular, pro-science, democratic socialist politician. 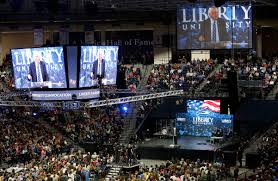 There was a huge crowd for his talk but that was because it was the convocation and students are apparently required to attend these events. But at least the university was willing to expose them to someone believes in the right to abortion and same-sex marriage and other social issues that are antithetical to them.

So how could Sanders connect with such a student body? He seems to have decided, wisely I think, to appeal to the idealism of young people and used the idea of justice and morality to find common ground with them while not ignoring the differences on major issues.

“Let me be very frank. I understand that issues such as abortion and gay marriage are very important to you and that we disagree on those issues. I get that,” Sanders said. “But I came here today because I believe from the bottom of my heart that it is vitally important for those of us who hold different views to be able to engage in a civil discourse.”
…

“You have got to think about the morality of that, the justice of that, and whether or not that is what we want to see in our country,” Sanders said. “In my view, there is no justice when, in recent years, we have seen a proliferation of millionaires and billionaires while at the same time the United States of America has the highest rate of childhood poverty of any major country on earth.”
…

But Sanders got plenty of cheers of support for his main message—we must do more to help the financial disadvantaged. Most of his speech was shaped around morality, which he tried to use as a bridge to agree with students here. Sanders, at one point, began ticking off statistics about how as “millions of people are working more hours for abysmally low wages of $7.25, of $8 an hour, $9 an hour” even though “58 percent of all new income generated is going to the top 1 percent.”

He also said that 20 percent of all children—and 40 percent of African-American children—now live in poverty. “How can we, I want you to go into your hearts, how can we talk about morality, about justice, when we turn our backs on the children of our country?”

The talk about racial inequality was a notable part of his remarks, especially after Sanders became a target of the Black Lives Matter movement over the summer, as activists sought more attention for the issue of institutional racism. Sanders, however, did appear to raise some eyebrows during the Q&A when asked what he would do bring healing and resolution to racism in the U.S.

He responded that the nation in many ways was created on “racist principles” and then spoke about the progress that has followed the election of President Barack Obama.

Sarah Posner says that Sander’s speech was a good one for many reasons.

Sanders didn’t go to Liberty to prove his faithiness (I know that’s not actually a word, but I can think of no other to describe a politician’s strained effort to prove his or her religious bona fides. If you can think of one, please let me know). Sanders didn’t go to Liberty to hedge his views on abortion or same-sex marriage in the unrealistic hope that a handful of evangelicals would switch their votes to the Democratic side.
…

Sanders quite plainly delivered his message without pandering, and without tiptoeing around his impassioned critique of greed and political corruption. He managed to do this without the well-worn religious pabulum used by politicians who unimaginatively talk about how faith informed their political views, making their speeches about proving something about themselves, rather than articulating a political program.

I don’t know if he swayed many minds but I think that it is important to spread your message to as wide an audience as possible without pandering to them and hope that at least a few of those present will begin to think differently. And some student reactions suggest that he might have done just that.

Liberty University students were quick to underscore differences with Sen. Bernie Sanders on social issues like abortion, but also shared some compliments for the senator following his speech Monday at the school’s convocation.

“I think he did a good job of not offending,” junior Emily Murphy said. “I think he said what he believes in, but he didn’t put us down, so I respected that.”

Keila Overcast, also a junior, said she thought it was appropriate for Sanders to be as up front as he was about his support for abortion rights and gay marriage, but as someone strongly opposed herself, she wished he’d said more to explain why he feels that way.

Michael Leh, a sophomore studying Christian leadership, said he saw himself voting for Sanders if the election came to a matchup between Sanders and businessman and television star Donald Trump.

“Even though I might not agree with him, I respect him the most out of all the candidates right now, the fact that he came here and spoke with us and at the same time was very blunt with us, I really appreciated that,” Leh said.

“It shouldn’t be a situation in which someone goes to the hospital and just then finds out, ‘oh you had stage four terminal cancer,’ when they knew that they may have had an issue earlier but, due to the fact that they didn’t have healthcare, they didn’t want to go to the hospital,” he said.

Here’s a short clip of a bit of his talk and of student reactions.