As the presidential campaign picks up steam (even though the actual date is still 18 months away!), the merits of the Iraq war are being debated once again as the chaos in the region and the rise of groups like ISIS has made even many people on the conservative end of the political spectrum begin to wonder if that fateful decision to invade Iraq has not resulted in creating a much worse situation. Everyone is eager to avoid blame for the debacle that has pretty much destroyed a once modern nation.

The tide against the war has turned so much that although Americans supported the war by a margin of 63%-34% back in 2003, when asked now to recall their position on the war back then, the number who say they opposed it wins by a margin of 47% to 38%. The Democrats are much worse than Republicans when it comes to retrospectively changing their views, highlighting their shame at having been suckered into support an indefensible war. 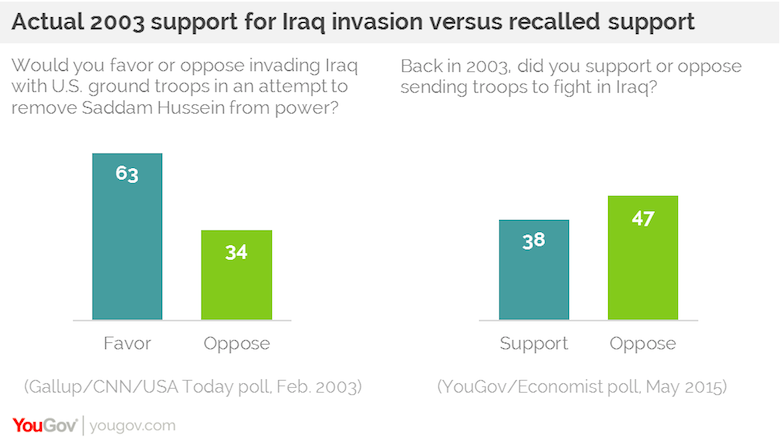 The question that is now being posed to candidates is “If you knew then what we know now, would you have invaded Iraq?” The interviewers and candidates are looking at this largely from the point of view of US interests but we must never forget that the costs of that invasion on the people of the region has been far greater, with hundreds of thousands killed, many more injured, and huge numbers of people who have had their homes and communities destroyed and become refugees and at the mercy of various armed groups engaged in never-ending strife.

When the public is asked this same question, only 30% say ‘yes’ and 57% say ‘no’. The fact that nowadays ‘no’ seems to be the only acceptable answer is accepted even by Fox News interviewers and seems to be another indication of how disastrous that war has been. This is the uncomfortable position that public officials who supported the war then now face because they cannot quietly switch their positions. Both Jeb Bush and Marco Rubio have floundered when they tried to find ways to avoid condemning a war initiated by a president of their own party.

But the assumption behind that question, that at that time of the invasion the decision was correct and that it is only in hindsight that it is seen to be wrong, is itself flawed. The fact is that many people argued back then that the war was either wrong or a mistake, including 23 senators and 133 members of the House of Representatives who voted against the resolution authorizing war.

We can call this the “None of us pundits would have been wrong about Iraq if it wasn’t for Judith Miller” line of questioning. This rhetoric goes something like this: since we invaded, the war has gone epically FUBAR, so it’s obvious now that it was a mistake, and so we can mock you for not admitting as much.

But because of Judith Miller, it wasn’t obvious even to all of us geniuses back then, which is why virtually every media outlet to the right of Democracy Now! (MSNBC included, as old friend Alex Pareene wittily pointed out) got it wrong for years on end, back when this issue actually mattered.

Go back up a few paragraphs and look at that list of media outlets. All of them – the Washington Post, the Wall Street Journal, the New York Times obviously, the Chicago Tribune – they were all card-carrying Iraq war cheerleaders.

But as Taibbi points out, you did not have to be clairvoyant or some kind of military or political genius to see the many ways in which the Iraq war was wrong and heading for disaster even back then.

It was obvious even back then, to anyone who made the faintest effort to look at the situation honestly, that the invasion was doomed, wrong, and a joke.
…

First you had to accept a fictional implied connection between Saddam Hussein and 9/11. Then you had to buy that this heavily-sanctioned secular dictator (and confirmed enemy of Islamic radicals) would be a likely sponsor of radical Islamic terror. Then after that you had to accept that Saddam even had the capability of supplying terrorists with weapons that could hurt us (the Bush administration’s analysts famously squinted so hard their faces turned inside out trying to see that one).

And then, after all that, you still had to buy that all of these factors together added up to a threat so imminent that it justified the immediate mass sacrifice of American and Iraqi lives.
…

I don’t believe that most of the otherwise smart people who supported the war back then, from Hillary Clinton to the editorial boards of our major newspapers, bought any of this. What did happen is that a lot of people got caught up in the politics of the situation and didn’t have the backbone to opt out. They didn’t want to look weak, un-American, or “against the troops,” at least not in public, so they sat out the debate and got behind the president.

That’s why the lambasting of Jeb Bush by all of these media voices grinds a little. At least plenty of Republicans sincerely thought the war was a good idea. But I know a lot of my colleagues in the media saw through the war from day one.

The bulk of them hid behind the morons in our business, people like Tom Friedman and David Brooks and Jeffrey “I trusted the Germans” Goldberg, frontline pundits who were pushed forward to do the dirty work, the hardcore pom-pom stuff.

Many others, particularly the editors, quietly sat by and let lie after lie spill onto their papers’ pages, telling themselves that this wasn’t wrong or a mistake until years later, when we found out for sure the WMD thing was a canard.

As I was cleaning out some old files in my desk, I came across the notes that I had prepared for several talks that I gave against the Iraq war at various teach-ins back in the first few months of 2003. Even someone like me, simply by reading the global press and maintaining a skeptical attitude, could see that the whole war was being waged on a fraud, and like all such fraudulent wars, would end up badly.

If someone like me could know this, it is hard to imagine that more knowledgeable people did not. The fact is that the public were deliberately lied to by the Bush White House and the media and stampeded into approving the war. And you can be sure that the same tricks will be used again for the next war. 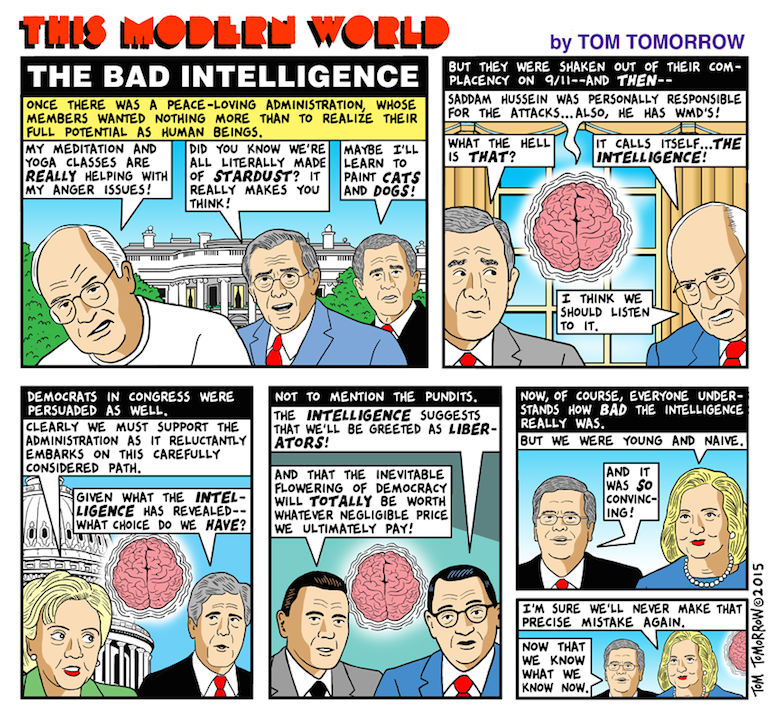