Today is the day that the US commemorates Dr. Martin Luther King, Jr., a man whom I admire greatly and have written about before many times so will not repeat those views. But I will likely not be going to see the new film Selma, that deals with the civil rights struggle of which he was such a big part and uses a key event of that struggle to tell the story, even though the film has been praised.

I have no doubt that it deserves the many compliments it has received. It is just that I generally have mixed feelings about watching feature films that are biopics or bout actual historical events that I have some knowledge about. These films have to tell a story and in the process they tend to distort the actual history and, given the power of film, especially one that is well made, to shape our consciousness, I don’t want my own interpretation of those events replaced with that of the filmmakers. So while I will watch documentaries, I tend to avoid historical feature films about specific people and events. I did see Malcolm X but did not particularly care for it, because while Denzel Washington looked like him, his portrayal did not match the image I had of Malcolm from reading his own words or reading about him or watching clips of him.

I will watch films tell stories that use actual historical events (whether it be the Vietnam war or the civil rights era) as a backdrop unless these films deal with such terrible events (such as slavery or the Holocaust or wars) that they generate feelings of horror and disgust in me just thinking about them so that I know that watching a film that portrays those things in graphic detail will be too much for me to take. Films such as 12 Years a Slave, Schindler’s List, and Saving Private Ryan were those that I avoided for that reason.

This brings me back to Selma. I have read quite a bit about that era and have my own impressions of the roles played by Dr. Martin Luther King, Jr., Lyndon Johnson, and other well-known figures and am not sure that I want those replaced by the filmmaker’s vision. Bill Moyers, who was Johnson’s press secretary during those turbulent times, had a ringside view of some of those events and was asked about how the film compared with his own recollections.

As for Lyndon B. Johnson: There’s one egregious and outrageous portrayal that is the worst kind of creative license suggesting the very opposite of the truth, in this case, that the president was behind J. Edgar Hoover’s sending the ‘sex tape’ to Coretta King. Some of our most scrupulous historians have denounced that one. And even if you want to think of Lyndon B. Johnson as vile enough to want to do that, he was way, way too smart to hand Hoover the means of blackmailing him.

Then casting the president as opposed to the Selma march, which the director does, is an exaggeration. He was concerned that coming so soon after the Civil Rights Act of 1964 there was little political will in Congress to follow up so soon with voting rights legislation.
…

Also, the director has a limpid president speaking in the Senate chamber to a normal number of senators. In fact, he made that speech in the House of Representatives where the State of Union speeches are delivered. Johnson was more animated and passionate than I have ever seen him, and I was standing very near him, off to the right. The nation was electrified. Watching on television, Martin Luther King Jr. wept. The film blows the possibility for true drama here — the drama of history happening right before our eyes. Nonetheless, go see it. You’ll be reminded of what happens when courage on the street is met by a moral response from power.

Moyers goes on to give interesting opinions about Chief Justice John Roberts (“Roberts’s great conceit – shared by other conservative members of the court, including Clarence Thomas who keeps trying to kick over the ladder by which he himself was hoisted to prominence — is that racism is no longer the problem it once was.”), other personalities, the state of the country, and about Johnson.

Lyndon B. Johnson owned and operated a ferocious ego. But he was curiously ill at ease with himself. He had an animal sense of weakness in other men (he wanted to know what you loved and what you feared and once he knew, he came after you). He was at times proud, sensitive, impulsive, flamboyant, sentimental, bold, magnanimous and graceful (the best dancer in the White House since George Washington); at times temperamental, paranoid, ill of spirit, vulgar. He had a passion for power but suffered violent dissent in the ranks of his own personality. He could absolutely do the right thing at the right time — the reassuring grace, if you will, when he was thrust into the White House after Kennedy’s assassination; the Civil Rights Act of 1964; the Voting Rights Act of 1965. But when he did the wrong thing — escalating the Vietnam war — the damage was irreparable.

Of course, despite their best intentions, anyone’s attempt to accurately recapitulate a historical event, in the form of a book or a documentary or even an eyewitness account, will introduce some distortions by virtue of what is selected and what is omitted, what is remembered and what is forgotten, and the emphases that are given. But I am willing to put up with that inevitable feature as the price for getting a more accurate glimpse of what really happened.

I have been particularly concerned about revisionists attempts by people to ignore King’s biting criticisms of the state of the US as a whole that he made in his later years, after the passage of the Civil Rights Act and Voting Rights Act. Nowadays, that important part of his legacy tends to be ignored and his “I have a dream” speech is what people, especially conservatives, love to focus on, as this Tom Tomorrow cartoon from 2010 captures. This cartoon could be run every year on this day and still be topical. 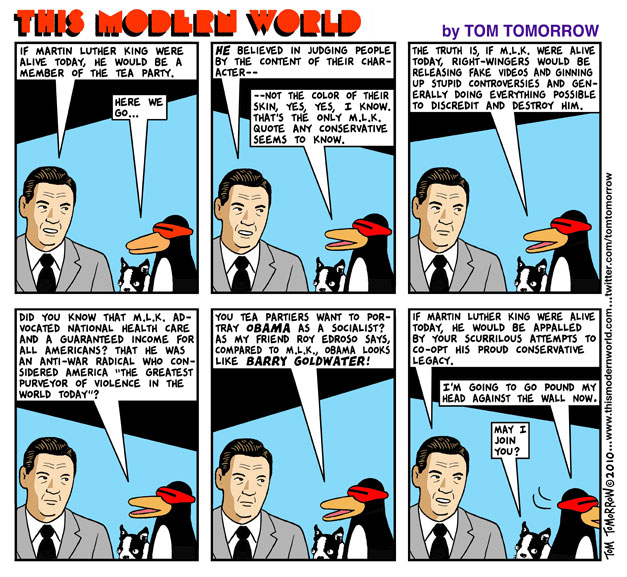