The incident of the intruder who recently managed to enter the White House before being captured was obvious fodder for the eternally panic-stricken to call for even more stringent security measures and the use of lethal force because that seems to be the only solution to any problem for those people. But it also provided a field day for humor and one has to merely scan through the collection of editorial cartoons around the nation to see that many cartoonists exploited this event for material. (See here and here for just two of the many cartoons I saw.)

But one particular cartoon generated not laughs but controversy and it was this one created by the Jerry Holbert, the editorial page cartoonist of the Boston Herald. 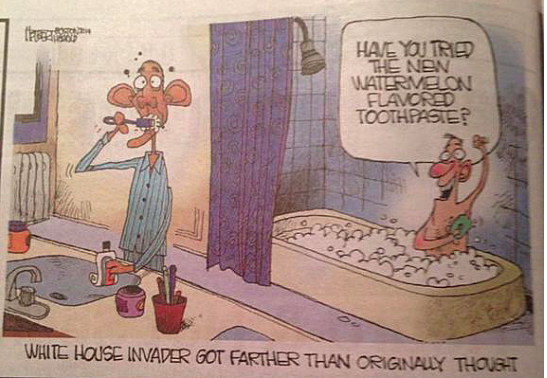 What caused the furor was the reference to watermelon toothpaste. That seemed to play on the racist stereotype that originated way back from the period of slavery when blacks were depicted as simple minded folk who were inordinately fond of that fruit and did not mind slavery as long as they had access to watermelons.

Holbert and the newspaper have been quick to reject the idea that they had any racist intent and he said that he chose that flavor toothpaste because he just happens to have it at home and it just came to his mind. The cartoonist’s website version of it has since changed watermelon to raspberry.

I am not sure when I became aware of this stereotype. Growing up in Sri Lanka I know that I had heard the jazz staple Watermelon Man composed by Herbie Hancock and covered by musicians of all races, with the version by the Latin jazz ensemble Mongo Santamaria sticking out in my memory. I did not associate the word with racism, at least not then, maybe due to the fact that its composer was black. But by the time I saw the thought-provoking film about racism Watermelon Man (1970) in the US about 25 years ago, I had somehow become aware of its negative connotations.

I wonder if this is a generational thing and to what extent people nowadays, especially younger ones, know that watermelon can serve as a racist symbol. Most overt racist tropes have disappeared from polite society though they are still propagated in the internet underworld by those who harbor such feelings, and they have had a resurgence since president Obama took office. But if one is younger and not that tuned in to political undercurrents, would one know that it is offensive to associate black people with watermelons?

Going back to the cartoon, the fact that the watermelon reference does not add anything to the joke is an argument in Holbert’s favor that it was an incidental, unthinking choice. To have deliberately chosen it would mean that Holbert was actually inviting anger by using a racist trope. On the other hand, you would think that an editorial political cartoonist, of all people, would be more aware than most of political and racial and social nuances. But I have often been surprised by people’s ignorance of things that I thought were common knowledge.

I don’t know anything about Holbert, his political views or even his age, to make a judgment either way. In cases like this, one would have to look at Holbert’s cartoon history and see if there has been a pattern of racist dog whistles. In the absence of any, one would have to give him the benefit of the doubt. Whoopi Goldberg is one person who defends him but she seems to be a minority.

What I am surprised by is that none of the editors of the newspaper, through whom all copy must pass, flagged the problem, unless they are also youngish and also oblivious to this bit of racist history. If that were the case, that may be a sign that this particular racist symbol has lost its potency and is now clung on to only by the die-hard, older racists. I am curious about how many of the readers here, seeing that cartoon, would immediately associate the watermelon reference with race.