The Swedish pop group ABBA that had phenomenal success a few decades ago were noted for two things: (1) trite, formulaic, and often meaningless lyrics set to catchy and bouncy tunes and (2) outlandish costumes that they wore during their performances. Below is a performance that showcases both.

Now one of the group members explains what lay behind the second fact. It turns out that Swedish tax laws allows performers to deduct the cost of the costumes only if the costumes are so ridiculous that no reasonable person would ever dream of wearing them in public as their regular attire.

According to Abba: The Official Photo Book, published to mark 40 years since they won Eurovision with Waterloo, the band’s style was influenced in part by laws that allowed the cost of outfits to be deducted against tax – so long as the costumes were so outrageous they could not possibly be worn on the street.
…

Reflecting on the group’s sartorial record in a new book, Björn Ulvaeus said: “In my honest opinion we looked like nuts in those years. Nobody can have been as badly dressed on stage as we were.”

But the rock group Kiss, being American, does not have this excuse for assaulting the eyes of the audience. 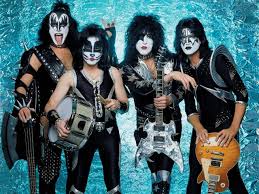