Matt Bors has an outstanding cartoon where he takes to task those who dump on today’s younger generation as whiny, needy, lazy, self-absorbed, narcissistic and tech-immersed, who demand instant and constant gratification. Very often this is blamed on indulgent parents who refuse to let their children grow up but hover them protectively for far too long. Here is the first panel of his cartoon where he takes to task this lazy and shallow form of journalism that manufactures trends and stereotypes out of nothing, 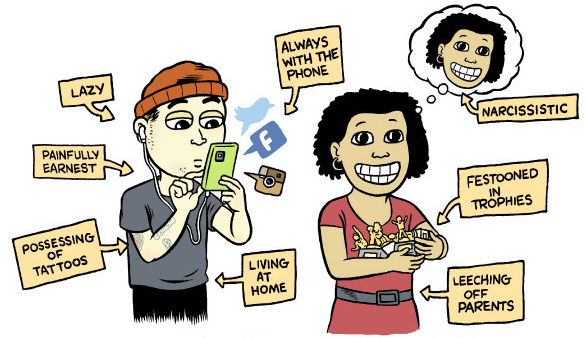 I simply cannot agree with those who speak of this generation in those terms. I come across this generation of students all the time because I work in a university and so see a steady stream of younger generations passing through. My own impression is that this generation is no worse than the others that I have been witness to and in many ways they are better, more socially conscious and accepting of diversity.

It is true that I teach in a private university that is fairly exclusive and expensive, so the students I encounter are not representative of the entire age cohort but you would think that this kind of place would be precisely the milieu where one would find these awful pampered specimens that are complained about. And I just don’t see it.

I published an article in the Chronicle of Higher Education on October 11, 2009 (unfortunately behind a paywall) where I took to task those who made such glib and undeserved generalizations. It ended this way.

It would be silly to argue that student behavior hasn’t changed over time. But what we are observing may not be a result of new traits emerging, but rather old traits manifesting themselves in novel forms because of changes in external conditions. Maybe parents have not become more clingy or students more psychologically dependent on them. Perhaps the truth is simply that college has become vastly more complicated and difficult to navigate, with its explosion of majors, minors, and other programs—not to mention the byzantine rules for financial aid—so perhaps some parents have felt obliged to step in more than they might have in earlier generations to act on their children’s behalf.

Similarly, we have always had students who were uninhibited, socially awkward, or needed instant gratification. But now e-mail and Facebook enable them to display those qualities in ways they couldn’t before—such as by expecting immediate responses to midnight queries or revealing personal information online they should keep to themselves.

Students are diverse and have always been diverse. I’ve taught for over three decades and have my own cache of funny or poignant stories about needy, annoying, or self-absorbed students. We teachers love stories about students, and treasure and accumulate them like anglers or golfers do about their pastimes. While my own stories can fit those spread around about the Millennials, many of them are about students from long ago, before it became fashionable to label students according to their birth years.

Bertrand Russell said that “no man can be a good teacher unless he has feelings of warm affection toward his pupils and a genuine desire to impart to them what he himself believes to be of value.” The trouble with generational stereotyping is that it sucks the individuality out of our students, the very thing that generates those feelings of warm affection. It makes them into generic types, whose personalities and motivations we think we can discern without having to go to all the bother of actually getting to know them.

Looking back, I actually find today’s students to be as delightful to be around as those from the past.