It’s amusing how a small little thing can lead to interesting tangents. For instance, I’ve recently spent time thinking about trans athletes. My first instinct was to outline human performance and physiology, until I realized that was the wrong approach.

Instead, let’s focus on Vanessa Pearl. She was assigned female at birth, and identifies as a woman, but she’s taller than 95% of all American men. This means she also has large hands and long limbs, which gives her an intrinsic advantage against shorter women. Should we ban her from women’s competition, due to her those advantages? Hell no, she came to her advantages naturally.

Sarah Robles was also assigned female at birth, and also identifies as a woman, but she weighs more than 95% of all American men. Some of that is muscle, which helps her relative to lighter women at weightlifting. Should she be banned? Of course not, for the same reason.

Caster Senmenya was also assigned female at birth, and also identifies as a woman. She’s considered a woman in her home country, and a sex check ordered by the International Association of Athletic Federations has cleared her for women’s competition. The details aren’t clear, but it’s a safe bet Senmenya produces an unusual amount of testosterone; when the IAAF demanded women athletes with high testosterone dilute it with birth control, Senmenya’s times suffered, and when those restrictions were lifted, her times improved. Should she be banned? I don’t think so, given she was born with the condition, and Senmenya herself makes a compelling case.

Semenya said the rule stigmatized women who do not conform to perceived notions of femininity and permitted discrimination against them. She argued that she should be able to compete the way she was born without “being obliged to alter her body by any medical means,” according to a statement released by her lawyers. …

She continued: “I am Mokgadi Caster Semenya. I am a woman and I am fast.”

She called the new rule objectionable because it would force some women with no prior health complaints to undergo hormone treatment to lower their naturally occurring levels of testosterone. This would be done, her lawyers said, in “the absence of support by the available science.” Semenya is equally concerned, according to her lawyers, that the rule continues “the offensive practice of intrusive surveillance and judging of women’s bodies, which has historically haunted women’s sports.”

This argument should be the focus when discussing trans athletes. It doesn’t matter if every single one of them are fifty feet tall, what only matters is if you accept the existence of gender dysphoria as at least partly grounded in biology. If so, then the above argument demands you let them compete in the gender category they identify with. If that leads to situations you think are unfair, then you shouldn’t be using gender as a proxy for athletic ability, instead relying on metrics like muscle mass or height.

I argue yes, via two avenues. The first is an argument from absurdity: almost all the arguments made against gender identity also work against sexual orientation, and since we accept the latter we must accept the former.

It’s true that there is no magic machine we can use to detect your gender identity, but that’s also true of sexual orientation. If you are heterosexual, when did you realise it? I bet it was somewhere at or just before puberty, but well after you’d absorbed most of our cultural norms about sexuality. Are you sure you’re not just falling for a popular fad, or dysfunctional, or rebelling, or being pressured into it by activists? Have you tried having sex with others like you? No? Well then, how can you be so sure of your heterosexuality?! Maybe you’re really bi- or pan-sexual, and this hetero thing is just a phase you’ll grow out of.

The only way I can determine if you’re a lesbian is if you tell me, so why isn’t the same standard good enough for gender identity?

The only argument that fails this test is the argument from popularity. Heterosexuality is so widely accepted that it’s the default, which makes these arguments akin to explaining water to a fish; familiarity has bred ignorance and a lack of self-reflection, instead of contempt. Homosexuality isn’t quite as accepted, and in fact people have used the above arguments against lesbianism. Gender identity is theoretically on solid ground, but as it is relatively new in the public consciousness it appears as alien as being gay once did. If we were to hold a vote, “gender identity exists” would easily hit plurality but fall short of a consensus.

But we don’t put these things to a vote. We recognise that the argument from popularity is deeply problematic and sometimes false. If we feel squeamish using a ballot to determine whether sexual orientation is a fundamental part of humanity, we should be equally squeamish subjecting gender identity to the same treatment. And that crumbles the best philosophical argument against the existence of gender identity.

But if four in five gender-nonconforming kids did not medically transition, then one in five did. Even if we grant all the premises of that argument, we’re forced to concede that gender dysphoria exists! And as Shiv and many others have pointed out, we have plenty of reason to go further and question those premises.

Yes, science as a whole tends to fall flat when dealing with minorities, but if you dig carefully you can find researchers who do a decent job. This paper, for instance, points out something interesting about human development:

The testicles and ovaries develop in the sixth week of pregnancy. This occurs under the influence of a cascade of genes, starting with the sex-determining gene on the Y chromosome (SRY). The production of testosterone by a boy’s testes is necessary for sexual differentiation of the sexual organs between weeks 6 and 12 of pregnancy. […]… the brain itself is also capable of producing estrogens. In human beings testosterone may thus not only have a direct effect on a masculine brain, but, once converted into estrogens by aromatase, may also act on developing neurons. In addition, there are sex differences in brain steroid receptor distribution not only in adulthood but also during development. … There may also be direct genetic effects that affect the sexual differentiation of the brain without involving the sex hormone receptors. … The genes SRY and ZRY are candidates for this action since they are expressed until very advanced ages in the human brain, even though strictly speaking the role of these genes in sexual differentiation stops during development. There are at present many additional candidate genes for a role in sexual differentiation of the brain without the involvement of hormones, since it has been found that fifty genes are expressed at different levels in the brains of male and female mouse fetuses, even before the hormones come into play. […]

The brain structure differences that result from the interaction between hormones and developing brain cells are thought to be the basis of sex differences in a wide spectrum of behaviors, such as gender role (behaving as a man or a woman in society), gender identity (the conviction of belonging to the male or female gender), sexual orientation (heterosexuality, homosexuality or bisexuality), and sex differences regarding cognition, aggressive behavior and language organization. Factors that interfere with the interactions between hormones
and the developing brain systems during development in the womb may permanently influence later behavior. As sexual differentiation of the genitals takes places much earlier in development (i.e. in the first two months of pregnancy) than sexual differentiation of the brain, which starts in the second half of pregnancy and becomes overt upon reaching adulthood, these two processes may be influenced independently of each other.

The authors buy into the sex binary and use out-dated terminology like “transsexual,” but if you look past that you find evidence that sexual development in human beings is ridiculously complex. Gonad and brain development happens at different times, hormone levels vary widely, and genes also play a significant role, which sum up to a tonne of room for variation. There is a biologically plausible explanation for gender identity, above and beyond so-called “feelings.”

We’ve also got to show that we can measure gender identity, and that for trans people it is consistent in the expected direction. 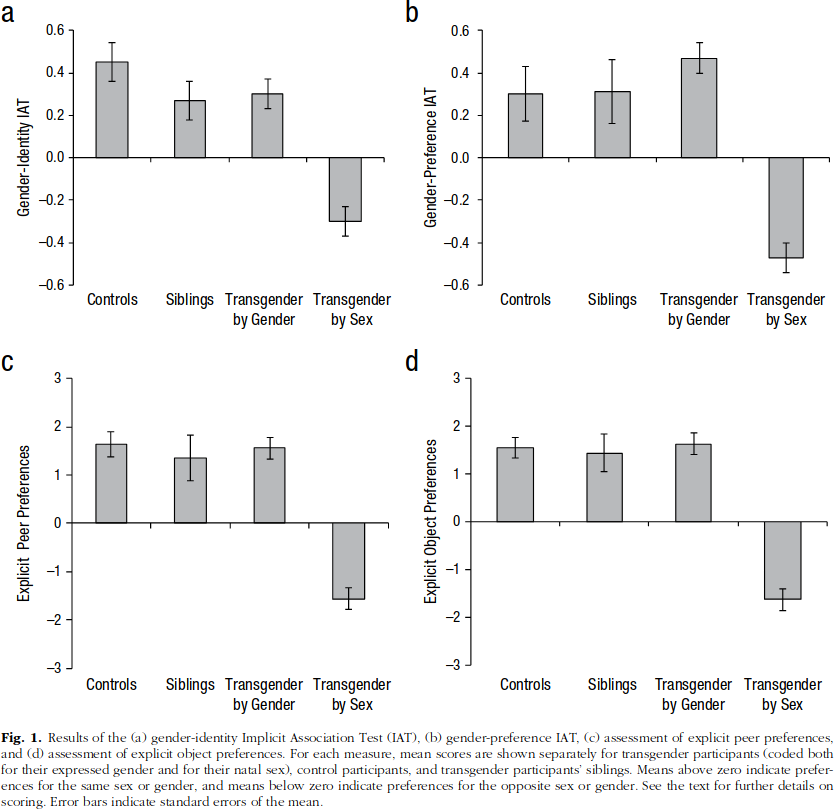 The most rigorous study I’m aware of does a good job of this. It throws four types of tests at children who have transitioned, some of which are implicit rather than explicit, and finds that in each case their expressed gender matches up with their chosen identity but not their originally assigned sex. This study isn’t perfect: the sample size is small (32), the authors extended the original study to include more participants (they claim “No substantive changes resulted from the addition of these participants, but all estimates became more precise.”), and the study pool was self-selected. Still, it beats studies which instead quizzed the children’s parents with tests that weren’t designed to measure gender identity.

It also helps to have studies which show trans people having better mental health outcomes after they transition.

Pooling across studies shows that after sex reassignment, 80% of individuals with GID reported significant improvement in gender dysphoria (…). Proportion in [Male-to-Female] subgroup is 71% (41–93%) and in FM subgroup is 86% (65–98%).

When measured by the Utrecht Gender Dysphoria Scale (UGDS/UGS), FM and MF individuals had minimal gender dysphoria remaining after transition, which was comparable to gender concordant controls without GID and better than dysphoria in untreated individuals with GID. They reported good satisfaction with the new assigned sex, physical appearance, had no doubts about their new gender role or their ability about maintaining this role in the future. Satisfaction with primary and secondary sex characteristics was significantly higher when pre- and posttransition therapy data were compared. Most individuals in these studies did not report regrets about transition therapy. In one study, however, 3/17 individuals regretted sex reassignment and 2/3 sought reversal procedures.

Here’s a systematic review which demonstrates exactly that. The pooled sample size is excellent (1,833), but the authors also note that the studies they looked at were poor quality and had confounding factors.

Studies lacked bias protection measures such as randomization and control groups, and generally depended on self-report to ascertain the exposure (i.e. hormonal therapy was self-reported as opposed to being extracted from medical records). Our reliance on reported outcome measures may also indicate a higher risk of reporting bias within the studies. Statistical heterogeneity of the results was also significant. Furthermore, since hormonal therapies were administered as a part of sex reassignment, inferences regarding hormones solely are very weak and are confounded by the effects of sex reassignment surgery and psychotherapy, which were provided implicitly or explicitly in most studies. … Lastly, the heterogeneity of methods, in which the outcome of satisfaction with sexual function was assessed, may further limit inferences about this outcome. This limitation does not apply to other outcomes such as gender dysphoria, which was assessed across studies with standardized scales.

It is also important to recognize the impact of cultural factors and treatment availability on the outcomes of reassignment therapies. Cultures that reject gender atypicality would subject transsexuals to more victimization and social stigma, which may worsen pre- and posttreatment social and psychological functioning levels. Individuals in countries without access to treatment may also have worse outcomes.

Again, these studies don’t prove the existence of gender dysphoria, but they do help cement its plausibility and give a biological explanation. And if we’ve established that, then there’s no objection to trans athletes competing with people of the same sex they’ve transitioned to.