Yeah, I got it wrong. “Sneaky Fucker theory” isn’t a thing, but “sneaky fucker” is an informal name for a well-known mating strategy. PZ did an excellent job of straightening things out, and I strongly recommend you read his take.

But he touches on one point that I think is worth repeating and expanding. What precisely is Boghossian saying with these two tweets? 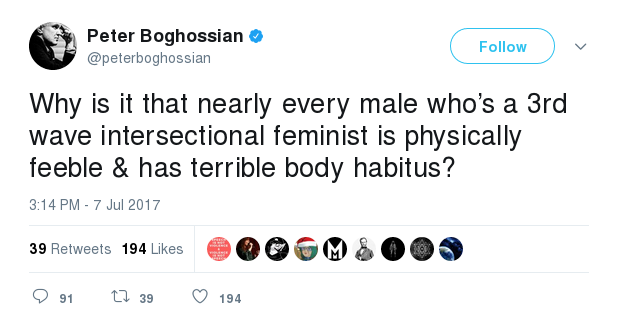 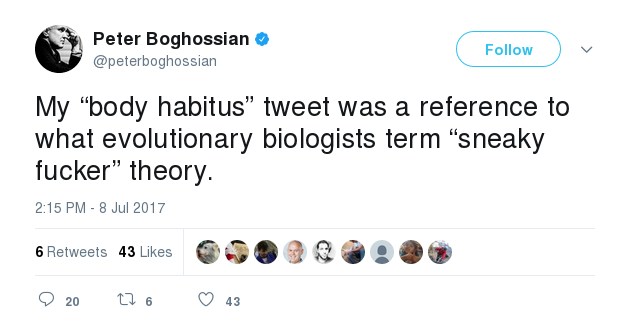 Back on topic: should a male feminist openly attempt to court or woo someone of the opposite sex (sorry, LBTQ+ people, you’re not in this story), the strong male would jump in and physically prevent them. In our species this would probably take the form of a show of dominance, but it could easily escalate into violence.

So what the male feminist does instead is try to intercept women when the man who controls them isn’t around. This might take the form of joining a yoga class or staking out coffee shops and grocery stores, but as the name “sneaky fucker” implies male feminists would be very opportunistic and also circulate widely in search of a chance encounter. If worse comes to worse, they’ll pretend to be gay or asexual (sorry, GA people, you are in this story) and carefully wait until their competitor turns his back.

At this point, they strike! Working quickly, they whisper some Kimberle Crenshaw or Anne Fausto-Sterling or Susan Stryker or Raewyn Connell or Eve Ensler or Sleater-Kinney in their target’s ear. If the woman is receptive, she and the male feminist will slip to the nearest washroom or broom closet for a quickie. Satisfied, the woman returns to the man who controls her, while the male feminist quietly slips out the back. If he’s lucky, the woman will be fertile and the man who controls her will be stuck providing for the kid. He probably isn’t, but oh well; if he keeps this up, eventually a woman will bear his child and another male feminist might be born into the world.

No really, that’s the “sneaky fucker” strategy in a nutshell. PZ has a quick explanation, and now that he’s pointed me in the right direction I can double-check that with actual scientific papers.

They also are not feminists because they wish to have more time with their children and form stronger bonds; nope, male feminists are just looking for the next quickie. Are they concerned about the high rates of men committing suicide due to toxic gender roles? Nah, it’s all about getting hard. Improving the lot for male victims of sexual assault? Maybe later, first they’ve gotta cruise a yoga class for chicks. Male feminists don’t pursue feminism even when it benefits them, according to Boghossian. The desire to mate makes all else secondary.

Nevermind how cartoonishly unlikely it is, Boghossian’s view of male feminists is deeply cynical and pessimistic. This shouldn’t be a surprise; people who aren’t feminists tend to hate men more than feminists because of the myths they buy into. Boghossian is just one more data-point on that pile.