If you’d asked me about it six months ago, I would have been adamant that we’d never get an email from the Trump camp admitting to collusion. Anyone merely considering collusion would ensure there were multiple layers of plausible deniability, layering on handlers and indirection to throw smoke at anyone on the trail. 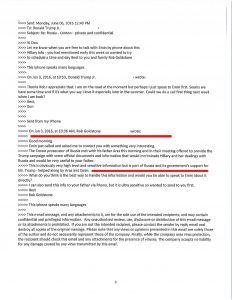 The Crown prosecutor of Russia met with his father Aras this morning and in their meeting offered to provide the Trump campaign with some official documents and information that would incriminate Hillary and her dealings with Russia and would be very useful to your father.

This is obviously very high level and sensitive information but is part of Russia and its government’s support for Mr. Trump – helped along by Aras and Emin.

That’s from an email sent to Donald Trump Jr. by Rob Goldstone, sent after the DNC was hacked but before the emails were made public. It was forwarded to Jared Kushner and Paul Manafort, and Trump Jr. promised to bring them to the meeting. It came when Trump Sr. was under Secret Service protection, and the eventual meeting took place just one floor down from Trump Sr.’s office in Trump Tower. The “crown prosecutor” is Natalia Veselnitskaya; a full background on her is long and complicated, but suffice to say she’s involved with the Russian mob and businesses, and has been surprisingly vocal in opposing the Magnitsky Act, to the point of producing movies about it. Here she is shoulder-surfing over Michael McFaul, former US ambassador to Russia, at a hearing on US-Russia relations. After the first contact but before the meeting, Trump Sr. bragged that he had some dirt on Hillary Clinton to share.

You can’t get more smoking gun than this. And yet Donald Trump Jr. just published the email exchange to his Twitter account, in full. Apparently the goal was to jump in front of this New York Times story (they’ve archived most of the emails, FYI). If so, bravo, but maybe he should have thought more about where his jump would land him.

[Much thanks to Salty Current, blf, and the other commentors hanging out in the Political Madness thread for providing much of this info. Wish I had the time to join in again…]

And Now For Something Completely Different » « Sneaky Fucker