We haven’t screwed with an online poll in a long time, but I think this one deserves a special bit of attention. 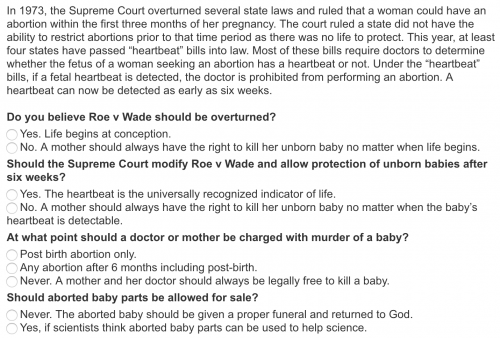 It’s from Arizona Wingnut Paul Gosar, DDS. It’s stupid because the wording is so flagrantly biased to the point where it shouldn’t even be a poll — if you feel that strongly about the issue, why are you asking for others’ opinions instead of standing up for your principles? I answered “no” to everything except the last one. I wonder if he gets enough votes that reject his biases, that he’ll then do an about-face?

I wasn’t even trying to be mindlessly contrary. I think “no” is the right answer to every question there but the last.

The Republicans have put out an online poll to find out what you think of the media coverage of the Trump administration. It’s a trap! Watch what you say on it, because it’s trying to put you in a bind: you either think the mainstream media sucks and is biased against Trump, or you think it’s doing a wonderful job. There is no provision for “Mainstream media sucks because they’ve been far too kind and wishy-washy about the Asshole-In-Chief”. Go ahead and take it though, and let one factor decide how you answer: will it make Donald Trump unhappy, and go against the result the poll is engineered to generate?

I mentioned that one of the dignified trees in our yard was marked for death — we got the detailed diagnosis. It’s Dutch Elm disease. We have some guys coming by on Monday to hack it to death and haul away its dismembered limbs.

But it’s not all sad and grisly news. We’ve also talked to the city, and they’ve given us their list of trees to be planted around town this fall (the number is how many of each they have on hand), and we can get on the list and name a preference.

We’re going to do some research ourselves, but I thought I’d be lazy and ask all of you readers — which ones do you like and why?

Of all the things Twitter needed to improve their service, allowing meaningless polls of your subset of readers wasn’t one of them. But there you go, you can create polls and get the biases of your readership expressed in cold, hard numbers that mean nothing at all.

Do you agree that Black Lives Matter #BLM is the new black version of the Klu Klux Klan? (Retweet)

Do you agree that Black Lives Matter #BLM is the new black version of the Klu Klux Klan?
80% Yes
20% No

(I think you’ll need to go to this link on Twitter.com and have a twitter account to vote.)

So here’s a guy who has a lot of racist friends, who has made an utterly stupid racist statement, and is asking all of his fucking racist buddies to validate it.

Unbelievable. The BMJ hosted a written debate on homeopathy. The side for homeopathy blathers on about various studies and meta-analyses and mostly just vaguely suggests positive results; when they get specific, the best they can say is that homeopaths use fewer antimicrobials. And their summary is truly ignorant.

Doctors should put aside bias based on the alleged implausibility of homeopathy. When integrated with standard care homeopathy is safe, popular with patients, improves clinical outcomes without increasing costs, and reduces the use of potentially hazardous drugs, including antimicrobials.

We should set aside the fact that there is no mechanism to allow water to magically retain the power of non-existent molecules? I cannot do that, sir. I also cannot set aside the ludicrous rationales provided for the medical utility of plain old water, which suggest that homeopathic practitioners are gullible fools.

END_OF_DOCUMENT_TOKEN_TO_BE_REPLACED

You can’t imagine how much I hate the loud, cheesy, obnoxiously sectarian chimes that ring in the cemetary near my house — they’re so loud that we have to close up all the windows in my house all summer long, unless we really want to listen to hymns every 15 minutes. They were briefly shut off for a while last year when someone cut the cables — really, I’m not the only one who hates them — and that ass, Ted Storck, who had them installed and lives nowhere near them had them repaired, and then wrote to accuse me of having done it.

END_OF_DOCUMENT_TOKEN_TO_BE_REPLACED

I don’t expect to win this one: it’s gotten the attention of github, the core of the dudebro universe, and it’s already gone far in the direction of delusion, with swarms of self-righteous gamer goons rushing to vote for their bias. The poll asks, What do you think is at the heart of GamerGate? (and like all badly designed polls, uses choices to split the vote). Here’s the status so far: 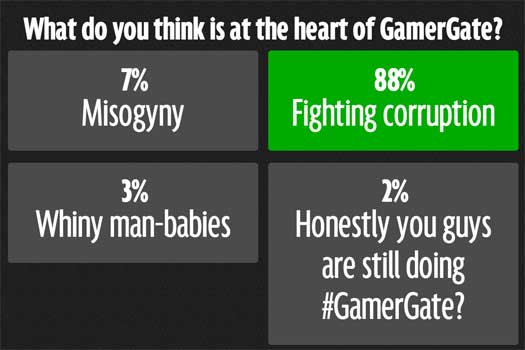 And this is right after the article tells you to go read a summary written by the GamerGate goons which starts like this:

How do you look yourself in the mirror in the morning if you are willing to so openly condemn “social justice”? Isn’t it also clear that what bothers these guys most is feminism?

It’s not going well for him. Shall we make it worse?

Do You Trust Dr. Oz?

He has put up a poll to choose which Australian women ought to be demonized. The primary criterion for inclusion seems to be that they are a) women, and b) not as stupid as he is, and apparently women who are smarter than Blair are to be called “frightbats”.

Who is Australia’s craziest left-wing frightbat?

I only know Catherine Deveny and Jane Caro on the list; they both seem nice, and since Caro was behind, I voted for her (sorry, Catherine). Some of them have even been promoting the poll.

Of course, it was just an honour to be nominated. #leftwingfeministfrightbat

Vote one. Me and all the others. I love them all. http://t.co/pwUH0ita4J

It's not fair! I am in Andalucia Spain, sipping sangria on a terrace (where frightbatting gets you) and can't rally support! Vote for me!

Can we just forget about the poll and declare every one of them too scary for Tim Blair?

It’s not so much the stupidity of this poll as it is the blithe arrogance of it.

For several years the debate has raged on between Conservatives and Liberals about two words in the Pledge Of Allegiance.

These words are, “Under God”.

With an online poll. On a little-known website. Right.

POLL: Should “Under God” Stay In The Pledge Of Allegiance?

So if those numbers change, will the people at that website then just say, “Well, it’s settled then. I guess we’ll stop saying “under god.”? If they stay the same, will you atheists consider the issue resolved and resign yourself to praising god?