This is the kind of thing where you’d think the answer is “Duh!”, but people are still struggling to make excuses for the Mt. Soledad Cross. This has been facing years of court cases, and fans of the cross, including Antonin Scalia, have been in denial that it’s a Christian symbol in defiance of all of the obvious facts. Their heads are so far up their asses you might think they were Christians, or something.

Have fun voting. The heads-up-asses brigade has come out in force for this one, so it’s not going to be easy.

Do you think the Mount Soledad cross should come down?

If you happen to be an acolyte of the Cthulhu mythos, you might be interested in answering this poll. If you are not a follower of the mythos, do not answer this poll, or fell non-Euclidean creatures will nest in the eaves of your house, and gibber insanely through the night until your mind is a shattered ruin and they can slip in and gnaw on your soul. You have been warned.

We will not judge our fellow atheists who fear an Elder God.

Boy, when you see those four words strung together in the title, you know exactly what you expect to see: sophisticated theology. They certainly do parse the temporal options finely to conceal the fact that they are proposing to to use the public school system to promote sectarian religious practice.

When do you think prayer is appropriate in high school football?

They left out “Whenever the opposing team scores a goal” and “When the cheerleaders do those high kicks” and “Someone ought to be constantly praying to make sure the earth doesn’t open up beneath us and tumble us down into Hell.”

The Montgomery, Alabama police have pious plan to send out priests along with the police on emergency calls. “Trained” priests, apparently, which means they’re going to be spending money on completely unqualified people who can provide no material assistance to tag along with the police. Why? Because it makes someone in the chain of command feel good, I suppose.

Do you think police should send out trained clergy to violent crime scenes?

No, there should be a separation of religion and government  66.64%

The only virtue I could think of is that maybe they’d put a check on the police and prevent them from shooting innocent people, but you don’t need to be a priest to do that.

This is a cross in Middleboro, Massachusetts. It’s on public land in the town. 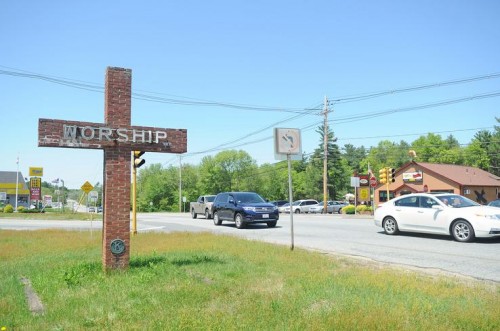 Would you believe that the people of the town stupidly looked at that and decided there was no conflict at all between a great big Christian symbol that says OBEY WORSHIP and secular government? None at all. Let’s just pretend that that is a secular message.

They have a poll, of course. It was apparently going very much the wrong way yesterday, but Cuttlefish has had his minions shredding it. I’m just coming along to administer the coup de grace.

What’s your take on the Middleboro cross?

This was entirely predictable. Axe, the deodorant company with the really horrible sexist ads, is doing something admirable, sponsoring a contest to send people to a space camp in Florida. They’re doing it with a poll, unfortunately (please, people, just stop! Popularity contests are not measures of merit!), and the one woman in the Malaysian contest got a flood of sexist remarks — tampon jokes and that sort of thing. Apparently, having human physiology disqualifies you from being an astronaut. Clearly these arguments are being made by anti-human robots! Someone needs to point out that all of the contestants poop and pee and sweat and drool and sneeze, and some of them even ejaculate.

You know what to do. Vote (on Facebook, which means a lot of you won’t be able to). The backlash is already favoring Roshini Muniam (Rose), so I think you’ll be just adding the final fillip, but that’s OK.

909,000 votes? I think the robots (who are all atheists, obviously) have already slammed into this poll. You may still use your feeble fleshy appendages to click on it anyway, puny human.

Do you think the words “under God” should be removed from the Pledge of Allegiance?

Every time I despair at the stupidity rampant in my own country, along comes the UK to reassure me that it is a worldwide phenomenon.

A poll in Kentucky is asking…

Should state science education standards require the teaching of evolution?

The answer is that if you want to be prepared to attend a good university, or it you want to be an informed citizen of the world, yes, you should be taught evolution in high school. If your dream job is selling popcorn for minimum wage at Ken Ham’s Ark Park* for the rest of your life, you’re probably OK without it.

The reminiscences of right-wing kooks are so very different from mine.

As a young child I remember very vividly reciting the Pledge of Allegiance and also morning prayer. When you talk about the “good old days” those are visions that come to my mind.  Of course those are things that have been taken away but Mississippi has decided otherwise.

I remember vividly how as a young child my school forced me to sit through the droll anecdotes of that old chucklehead, Paul Harvey. The first year I was just stupefied; gradually I came to despise that voice and its smug moralisms. For some reason, the public schools all thought the affected mannerisms of a conservative snake oil salesman were perfectly appropriate to blast at students every goddamned day.

Don’t get me started on the pledge of allegiance. I started out reciting that thing when I was very young, but got progressively annoyed at the very first line, once my vocabulary was good enough to know what the words meant: I’m pledging allegiance to a flag? WTF? I wasn’t even an atheist yet when I decided that was nonsense, and every morning I’d rise, put my hand on my heart (so I’d fit in), and say nothing. Then I stopped with the hand on the heart. Now I only rise because in the usual venues where this is done now, sitting would mean staring at the butt of the person in front of you.

Prayer would have been intolerable. Even before I was aware that I was an atheist, this business of pretending to talk to god made me very uncomfortable.

When I hear people babble about the “good old days” of school it always seems to be these memories of rote and ritual and reinforcement, stuff that is the antithesis of learning. Me? My magic school moments were learning about logarithms (seriously, mind blown), doing geometry with a compass and straightedge, algebra, and trigonometry.

So when some gomer tells me his vision of education was reciting the same words over and over, I’ve got him pegged already: he didn’t learn him nothin’.

Reliably, such people will continue to babble on, confirming my initial impression.

First and foremost though, why was the Pledge of Allegiance axed?  Because of the words “under God.” It’s based on our country and the fact that we are Americans who proudly belong to the United States of America.

When, exactly, was the pledge of allegiance “axed”? The last time I went to a school assembly they had us recite it (I didn’t). I’ve seen it done at sports events. As I said above, when I wasn’t even an atheist I found it objectionable for its tediousness and for the bizarre demand that we swear loyalty to a piece of cloth. Besides, the “under god” bit was tacked on during the Cold War and wasn’t even in the original version.

Having an open mind, I have always thought no matter what side of the fence you are on with the bible, “In God We Trust” is in everyone’s pocket; atheist or not.  Show me an atheist who doesn’t have at least a penny in his or her pocket.

Do we atheists have an alternative? If some form of currency valid in the US did not say “In god we trust”, would theists refuse to use it? Would carrying it in any way imply that you were an atheist?

This argument, stupid as it is, is actually rather interesting. Our constitution plainly states that the government may not establish any religion — yet here’s a Mississippi loudmouth declaring that “In god we trust” on money imposes a religious belief on its bearers. Thanks, guy, for declaring it unconstitutional!

So again, if it was deemed so bad for schools, why was it not removed from our currency? My point being, it should have never been removed in the first place, but some atheists want it removed from all currency.  We live in the United States of America and we base many of our principles on the Holy Bible.  If I moved to Japan I wouldn’t be complaining that my God was not being allowed in my child’s school and I sure wouldn’t complain about theirs.

Clearly, it should be removed from our currency, especially when it’s seen as an explicit endorsement of religion by the government. It’s also apparently damaging our educational system, since Mr Redneck here obviously had a substandard education, since he got through it all without comprehending the rudiments of logic and without learning any history. Sorry, bozo, but those religious phrases haven’t been removed, but were actually added in the 1950s; the founding principles of our country were not based on the Bible at all, but on the Enlightenment.

These guys always make me feel like a conservative. They harken back to the days of Joe McCarthy — they can’t see beyond the barrier of the Red Scare — while I fondly think it would be nice if we returned to the principles of Jefferson and Madison (sans the evil excuses for slavery, that is).

Anyway, what’s got the idiots in Mississippi fired up now? Their governor just signed a law requiring public schools to allow students to pray publicly over the morning intercom, and at various school events. You know, I evolved into an atheist gradually, only becoming aware of it in my teen years, but if they’d started my morning with some sanctimonious ass yammering godly nonsense at me every day, BAM, flaming militant atheist in kindergarten.

Of course they have a poll to go with their ignorant noise, and of course, since it’s Mississippi, you can predict exactly how it’s leaning.

Would you have an issue with allowing prayer back in your child’s school?