I’ll never get picked up in the NFL draft now.

Those of you who read the comments know I was whining a little bit about this sudden knee pain that developed over night. I was actually downplaying it — any time I bent my knee I was in excruciating agony. My wife can tell you that there was much screaming and groaning and cussing at our house the last few days. I’ve been basically immobile.

So I got into the doctor’s this morning. They poked and prodded and twisted and bent the joint, and I dutifully turned pale and howled and threatened to vomit, cursing the entire medical profession. In revenge, they first pulled out a gigantic needle and a huge syringe, and tapped my knee, sucking out large quantities of synovial fluid. As if that wasn’t enough, they’ve also hospitalized me — I’m under observation and pain management for a few days, while they carry out tests to figure out what made my knee joint go bad. If it turns out to be an infection…surgery. Whee.

Until then, I’m stuck in a bed with needles stuck in me, and they’re pumping me full of antibiotics and morphine and a whole bunch of good happy drugs. I’m already feeling blissful and sleepy. I might be out in 24 hours, or maybe 48, or maybe they’ll be hacking cartilage for a while. You don’t need me right now, right?

Everyone is announcing their schedule at Convergence: there’s the whole dang SkepChickCon schedule, Jason Thibeault and Brianne Bilyeu of FtB have produced theirs, and Dr Rubidium is doing a bunch of panels (wait…they let chemists in?). So I guess I’ll mention what I’ll be up to.

We have a little family affair every year in the Sandbox — these are hands-on activities, aimed mainly at kids, but everyone is welcome to show up.

Discover what an owl had for dinner! Dissect an owl pellet to solve the mystery and reveal clues about the owl’s diet and predator/prey relationships. What types of bones will you find in your pellet? Panelists: Mary Myers, Skatje Myers, PZ Myers

How do you extract DNA out of living things? What does your DNA look like? Find out and make a special necklace using your unique DNA! Panelists: Mary Myers, PZ Myers, Skatje Myers

Then there are the panels, lots of panels. I cut back on the number I was on this year, because last year I did something like a dozen and it was exhausting.

CONvergence 2014: When Science Isn't Your Friend.

When has science hurt people in reality and what has that taught us about how science should be practiced? We’ll discuss everything from the Tuskegee experiments and Henrietta Lacks to continuing issues like surgery on intersex babies. Panelists: Stephanie Zvan (mod), Caleph Wilson, PZ Myers, Mary Brock, Debbie Goddard

The truth is out there, and we’ll help you find it! We’ll cover a wide range of alien-centric conspiracy theories and discuss the implications these have on individuals and society at large. Panelists: JD Horn, Jason Thibeault, Nicole Gugliucci, PZ Myers, Scott Lynch

That’s the Scott Lynch who wrote the Locke Lamorra fantasy novels, by the way.

Join us to discuss what it’s like to come out as an atheist in various parts of the country, with different religious backgrounds, and the intersection for many of us with coming out in other ways, such as in sexual orientation and gender identity. Panelists: Ashley F. Miller, Heina Dadabhoy, PZ Myers, Debbie Goddard, Brianne Bilyeu

Every year we do what is basically a biology of sex panel, held late at night after the kiddies have gone to bed. It tends to get a little raunchy and amusing — it also tends to be overwhelmed with attendees. If you want to get into this one, show up early.

There are lots of other panels going on — it’s non-stop brain stimulation all weekend long. There also the parties late at night. The Skepchicks host one party room — their theme this year is the Skepchick Space Lab — and Freethoughtblogs hosts the adjacent room, in 228. Our theme is…the Deep, to complement the spacey chicks next door.

Freethoughtblogs is hosting a party to celebrate the mysteries of the ocean: fierce sharks, grasping tentacles, an alien world right beneath us. Enjoy cool drinks, talk with deep thinkers, get eaten by a squid…oh, wait, no. No one will be eaten. Probably. We’ll just have fun.

I have arrived in Hartford. Nice airport. Now I have to find my way to my hotel, and then I have a few hours to explore before my talk. I hear there is a fascinating historical site, Mark Twain House, near my hotel–maybe I’ll take a tour.

It should be interesting — I’ll be at the home of that well-known heretic, Mark Twain, from 7 to 8:30 pm. Instead of my usual talk, we’re doing something a little different: a conversation with Jacques Lamarre, the director of the place, about all this godlessness popping up everywhere. If you’re going to go to the official event, you should make reservations now!

Also, there were many suggestions about what to do afterwards, and I’m making an executive decision: let’s meet at Vaughan’s Public House around 9pm. I’m a sucker for an Irish pub.

Hey, it seemed like the fatherly thing to do. Also, loafing.

I’m going to be flying in to Hartford, Connecticut on 18 June to have a public conversation about The Happy Atheist. I know some people won’t be free at 7pm to join in, and I’ve been asked if there are any other public events planned while I’m there.

No, there isn’t. It’s a real blitz — I fly in on Wednesday morning, and fly out again early on Thursday. But I’m amenable! I’m staying at the Hilton Hartford on Trumbull Street, and if anyone knows of any good nearby places (or we could just meet at the Hilton bar), let me know and we’ll arrange something for post-talk relaxation. I imagine I’ll be free after 9pm, and I just have to be at the airport around 4am, so what the heck, the night is a dead loss anyway. Make it better.

While I was in Seattle, I got my picture taken with all of my surviving siblings, my mother, one grand-nephew, and my mother’s dog. 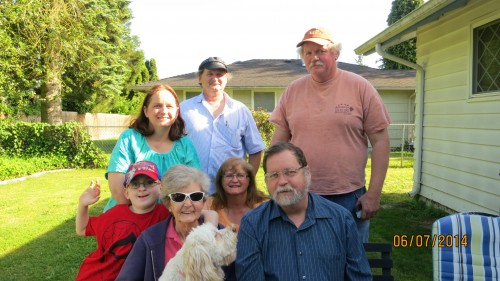 Tomi, Mike, Jim in back; Alex, Mom, Caryn, me in the middle; Bebe front.

This is mostly the same crew a few years back. 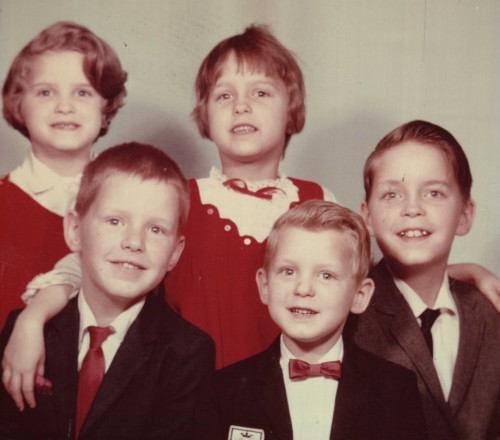 Caryn, Tomi in back; Jim, Mike, and me up front.

We haven’t changed a bit.

This is not good. I have a couple of students anxious to get to work (I’m anxious to get to work), and we’ve been prepping my lab zebrafish facility for an influx of new fish that we expected to arrive this week, and then I check into the Zebrafish International Resource Center, the source for all of our lines, and get this message.

Due to a fire, ZIRC services have been temporarily disrupted. We are unable to provide fish or accept submissions at this time. We sincerely apologize for this delay and hope that it does not seriously disrupt your activities. If you have an order pending at ZIRC, we will be in contact with you as soon as possible. Please contact us if you have any questions.

Yep, that’s us. Order pending. Expected to ship tomorrow. That’s not happening now. Most of my summer research money got spent on something essential that is indefinitely delayed.

Oh, well, I can’t blame ZIRC for a problem beyond their control, that I’m sure they’d rather hadn’t occurred either. I’m going to have to scavenge up some healthy, fecund experimental animals somehow. So my plan is to drive into Minneapolis today and visit a few quality aquarium stores (not Walmart) and scrape together a bunch of mongrel fish that will at least let me and my students do some preliminary practice. Which means my entire day is sort of demolished right now.

At least I can double up — I’m also taping some shows with Humanists of Minnesota this evening, so I’m making a long day of it.

Ophelia tells you the important stuff about our get-together last night: the view from the Olympic Sculpture Garden was spectacular.

If you think I was cute in that last picture, here’s an even better one: me and my mother in 1957. 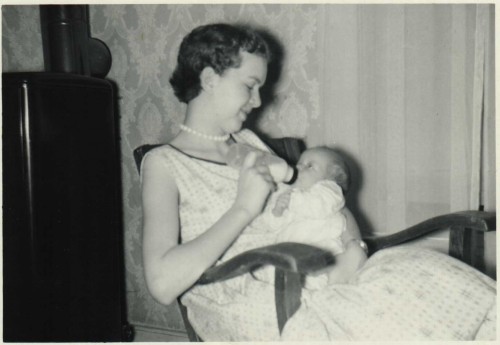 Notice: no beard yet.

I love the pearls. Very Jackie.