Thanks, Washington Post. And first thing in the morning, too! What a thing for an old geezer to wake up to.

Great. My demographic. Although, while I am over 65, I’m not sick or poor, so I can take some solace in that…except that I don’t think being old, sick, or poor should mean you get neglected by society, and I don’t think any of us should be categorized as an acceptable loss.

More than 300 people are still dying each day on average from covid-19, most of them 65 or older, according to data from the Centers for Disease Control and Prevention. While that’s much lower than the 2,000 daily toll at the peak of the delta wave, it is still roughly two to three times the rate at which people die of the flu — renewing debate about what is an “acceptable loss.”

And while older Americans have consistently been the worst hit during the crisis, as evident in the scores of early nursing home deaths, that trend has become more pronounced. Today, nearly 9 in 10 covid deaths are in people 65 or older — the highest rate ever, according to a Washington Post analysis of CDC data.

If this disease does get me, I’m going to raise a bony finger to point at all the heedless younger people who don’t believe in masking, or any other basic preventative measures. And I’m especially planning to claw my way out of the grave to knock on the doors of all those people who think that saying “it’s just a flu” is an excuse for ongoing contempt for core concepts in epidemiology. Or anyone who claims the pandemic is over. 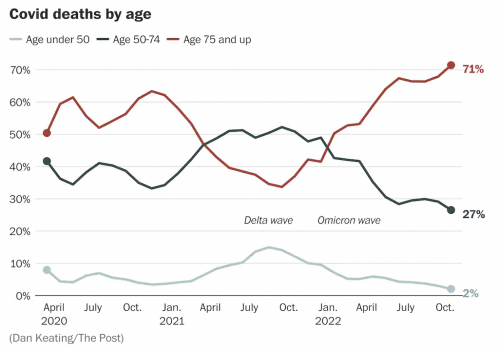 The military-industrial complex rejoices! » « Now that Thanksgiving is out of the way…