Hey! I was watching my spiders do this just yesterday! 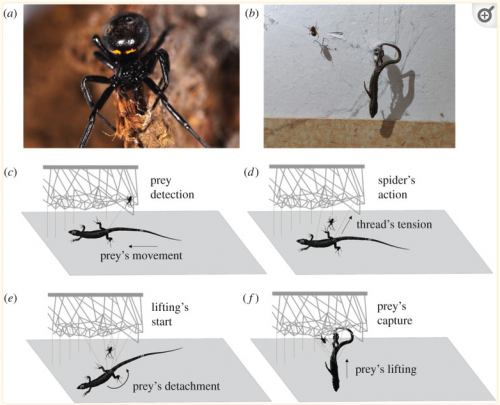 (a) An adult Steatoda paykuliana female of the family of Theridiidae (courtesy of Alessandro Kulczycki, Aracnofilia – The Italian Association of Arachnology). (b) A Steatoda triangulosa that captured a lizard (Podarcis muralis) by using lifting technique (courtesy of Emanuele Olivetti). Schematic of the technique used to lift the prey. (c) The prey is detected by the capturing threads and, once it is, (d) the spider starts to attach pre-tensioned threads to it. (e) When the weight of the prey is won by vertical component of the sum of the tensions the prey detaches from the surface and (f) starts to be lifted.

It was a feeding day. Little critters like Drosophila are easily handled — I saw one swoop down on a drag line to a fly walking on the floor, hog-tie it with a couple of quick flicks of silk, and then haul it up in one smooth motion. That was impressive.

However, these guys do kill and consume prey many times their size. I saw one snag a mealworm, which then went into a frantic writhing struggle and broke free, ending up on the floor of the container. The spider dived on it, trussed it up again, and then hoisted it up about 10cm to the heart of its cobweb. They are amazingly strong, and as the diagram illustrates, very clever about leveraging the structure of their web to secure their prey.

I have not tried feeding them small vertebrates yet, but the lab next door to mine is a herpetology lab, full of spider food. Don’t tell Heather Waye, she isn’t personally keen on spiders already, and hearing that they might have designs on her research animal would not be very endearing.