Fortunately, I’m not as interested in social behavior of spiders as I am in just general development, physiology, and behavior of individual spiders. Here are some recent cool things I’ve read.

I’m working with Parasteatoda and Steatoda in the lab, so of course I’m curious about their venom. Maybe you wonder about what those common house spiders are packing, too. Here’s a breakdown. 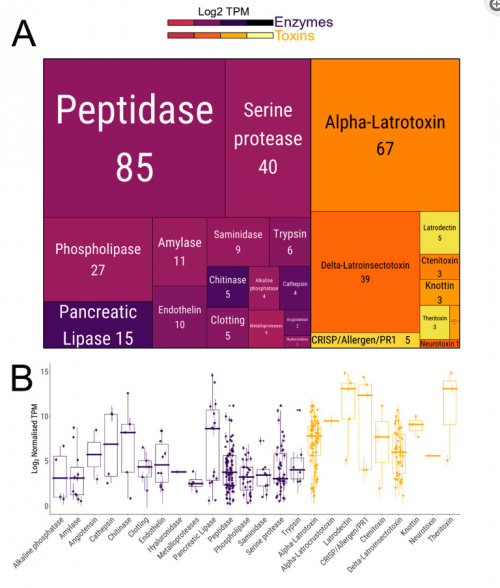 Relative abundance and expression level of genes encoding predicted venom enzymes and toxins. (A) Treemap chart of the main classes of venom-related enzymes and toxins present in Steatoda nobilis venom gland transcriptome. The size of the rectangles is proportional to the number of genes in each category, indicated under the labels. The colour represents the log2 transcripts per millions (TPM) of the median expression of the genes in each category. (B) Expression levels of each gene in each enzyme/toxin category. Dots represent the mean expression of individual genes across three biological replicates ± SD; purple: enzymes, orange: toxins.

What’s it all mean? A is showing us the number of genes involved, while B is indicating the expression levels of those genes. It looks like about a third of the genes are toxins, but that those are relatively highly expressed in the venom. The purples are not toxins, those are ordinary digestive enzymes. An important component of the venom is a collection of enzymes that break down proteins and fats and carbs, everything you need to turn guts into a nice soup. The oranges are the actual toxins — all the “latro” prefixes tell you these were identified in Latrodectus, the black widow. There is a lot of similarity in the venoms of black widows and false widows! That α-latrotoxin is the one that we vertebrates have to worry about. Do we need to worry about our common house spiders? Maybe a little bit.

We reveal the striking similarity between the toxins found in Steatoda nobilis venom and that of black widow spiders (Table 1). The most powerful toxin classes (α-LTX, α-LCT, α,δ-LIT) and the enzymatic machinery allowing the venom to more easily spread into the prey (metalo and serine proteases, chitinases) are both present in large quantities. This however does not mean that Steatoda is as dangerous to human beings as some members of the genus Latrodectus. If isoforms of potent toxins are present, our study does not provide information about their potency. Evaluation of toxin toxicity would need to be performed before any conclusion could be reached. Nevertheless, given the composition of the venom depicted in this study, S. nobilis should be considered a species of medical importance and there is no doubt that S nobilis (with Latrodectus tredecimguttatus) is one of the most dangerous spiders in Western Europe.

The easy solution is to not get bit. That’s not hard to do at all, these spiders are really not interested in you. Leave ’em alone, they won’t bother you.

If you are bitten — I’ve heard it’s a bit like a bee sting, although personally I’ve never experienced it — if you experience a strong reaction, the similarity to Latrodectus means black widow antivenin will be effective. As the paper says, though, they have nat assayed the potency of Steatoda venoms, and what I’ve heard is that they’re not as fearsome as black widow venom, so don’t panic. Besides, only one or two people a year die from the bite of the most deadly American/European spider, the black widow, while Steatoda has milder effects.

If you’re still worried, here’s a summary of recommended first aid. Wash the bite (infection is probably a greater danger than the toxins), use an antibiotic cream, and ice the area. Take ibuprofen and/or an antihistamine.