Dan Phelps sent me a few scans from a ‘treasure’ he discovered — a “99 cent Goodwill find that was 98 cents too expensive”. I thought it was interesting to see how creationist dogma has solidified, since this would be a comfortable fit with Answers in Genesis’s silly beliefs…except that it’s from a rival organization, the Institute for Creation Research, and they’d rather peddle their own garbage, thank you very much. Here’s the cover: 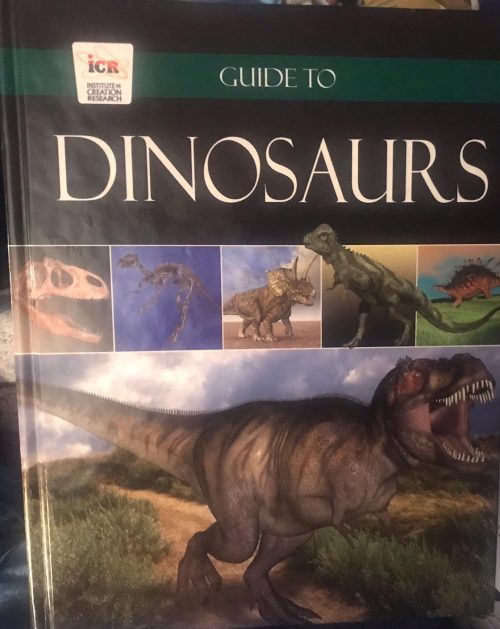 Looks good! If you didn’t notice the ICR logo, you might think it’s a real children’s book about science and dinosaurs. Any thought along those lines would quickly evaporate as soon as you opened it, though.

We get to learn that dinosaurs lived during the Ice Ages…excuse me, Ice Age, there was just one, and it was caused by the Flood. 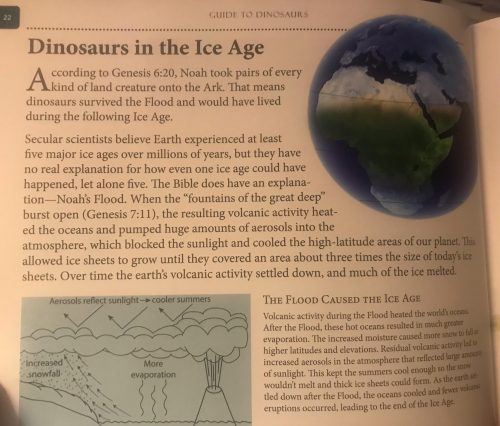 When they say secular scientists have no real explanation for Ice Ages, they just mean no Biblical explanation, because of course, we do. There are Milankovitch cycles which cause changes in the Earth’s orbit and axial tilt. The movement of the continents over long periods of time can disrupt ocean currents. Variations in greenhouse gasses, like CO2, levels vary with volcanic and organic activity.

But sure, if the creationists’ imaginary world-wide flood, which didn’t happen, had happened, it would certainly have caused radical effects on climate. That last human family adrift on a boat wouldn’t have survived the cataclysm they postulate, which kind of undercuts their explanation.

This is a familiar claim, that dinosaurs existed right up until recently, when they were hunted down and slaughtered by humans. 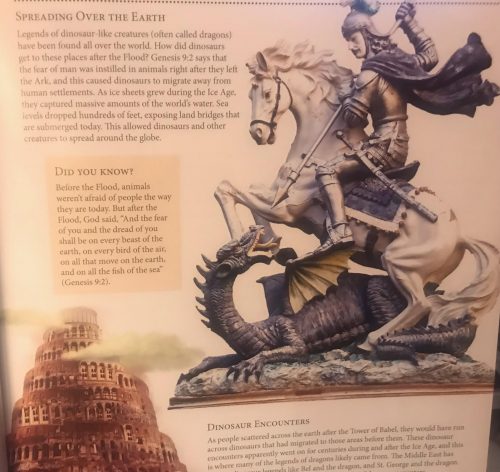 You just don’t read much about them in the histories because God made them a-scared of people, so they were hiding, after scampering over land bridges created by the Ice Age. What a convenient explanation for the dearth of diplodocids and azhdarchids and ceratopsians and so forth in human records!

Except for dragons. The only dinosaurs humans encountered were dragons. 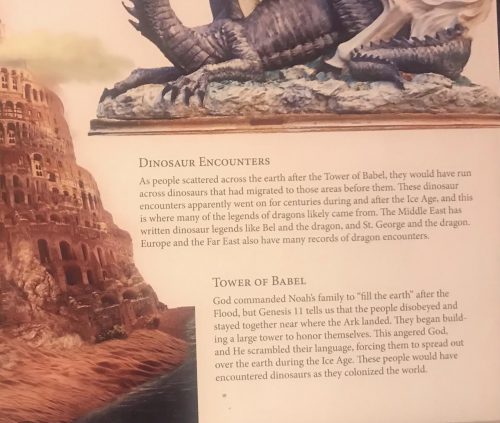 The ICR is kind of obsessed with their insistence that dinosaurs were on the dark and coexisted with people and were called dragons. 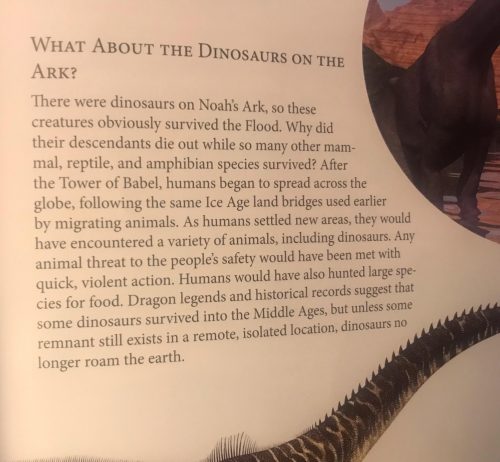 You have to understand — they’re writing a whole book about dinosaurs, but their holy book doesn’t mention them anywhere. Sure, there are some vague entries about Behemoth and Leviathan, but nothing like you’d expect if the ancient Middle East had wandering herds of hadrosaurs or packs of velociraptors. The Bible, instead, is full of sheep and oxen and dogs and fish and rats. They’ve got nothing exotic and exciting to compete with giant reptiles. They’re feeling rather inadequate, so they try to appropriate real prehistory. It’s sad and pathetic.

In addition to stealing the idea of dinosaurs, they also have to undermine those secular institutions that actually have the evidence for dinosaurs. 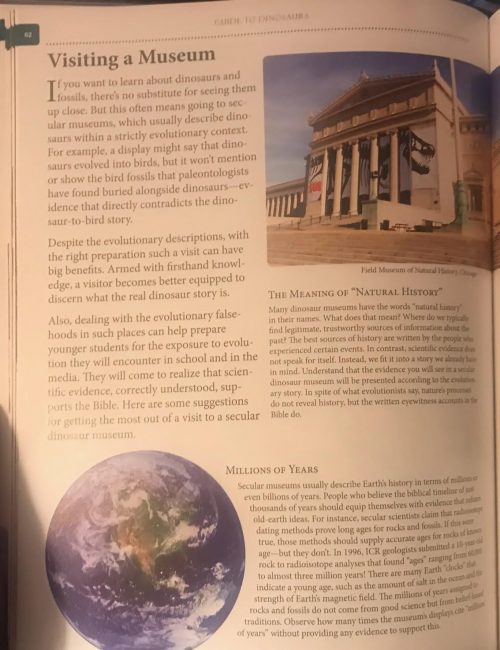 I am amused by the bit where they say the best sources of history are written by the people who experienced certain events. Oh yeah? Who wrote the book of Genesis, for example? Did the author live through all those events? Who was the narrator of the story of Adam and Eve, or the events of days 1 through 6 of the mythical creation week? I’d trust physical evidence over eyewitness testimony, anyway.

The claims about dating methods have been debunked multiple times, decades ago.

Oh, and here comes an assertion I’ve addressed several times myself, the good ol’ were you there? argument. 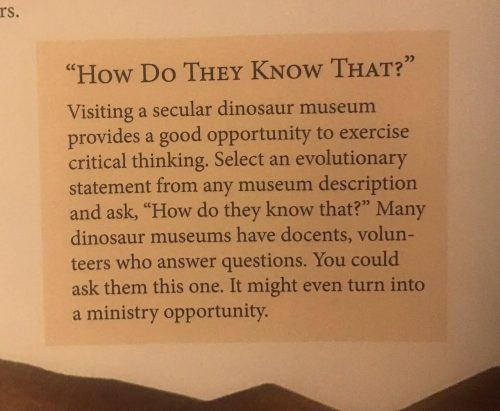 You know, a good docent would be unfazed by this question, and would be able to explain to you exactly how they know that. If they can’t, real museums (not the fake ones, like the Creation “Museum”) have professional scientists who are working on the specimens stored there, and they can explain in bewildering detail exactly why they make the descriptions they do.

If you see me in a museum, please do ask me questions. I love those kinds of “ministry opportunities”!

Jackson Wheat mentioned this odd claim to me the other day. 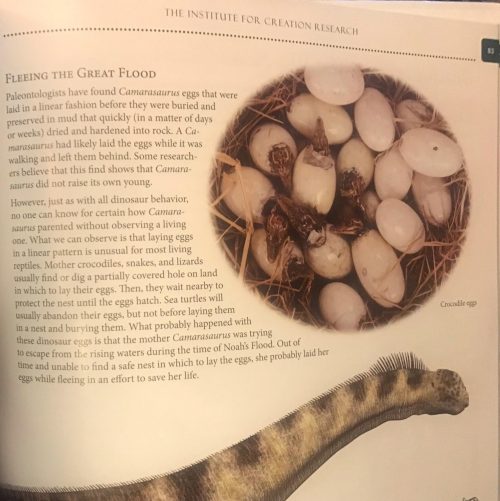 Finding a line of eggs is evidence that the mother dinosaur was running from the flood while pooping out eggs? I don’t know, that seems absurd — conditions are so extreme that the dinosaur is fleeing in a desperate panic, but once laid, conditions are so mild and gentle that the eggs are undamaged and can fossilize intact?

Also, although ICR probably doesn’t care, Camarasaurus is from the Jurassic, and the cataclysm that wiped out the dinosaurs was at the end of the Cretaceous, about 70-80 million years later. Mama could have taken her time. (Although I have seen creationists claim that their dating is greatly compressed, with the Jurassic in the early afternoon of the Flood’s first day, and the Cretaceous was in the late afternoon. She still had time, didn’t have to panic.) 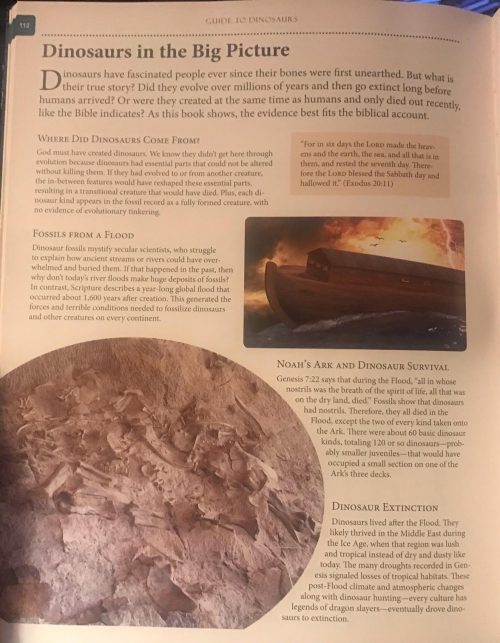 God must have created dinosaurs. We know they didn’t get here through evolution because dinosaurs had essential parts that could not be altered without killing them. If they had evolved from another creature, the in-between features would have reshaped these essential parts, resulting in a transitional creature that would have died. Plus, each dinosaur kind appears in the fossil record as a fully formed creature, with no evidence of evolutionary tinkering.

So many misconceptions! So what are these “essential parts”? Heart, lungs, brain, etc.? Because you should notice that all of these dinosaurs had all the essentials.

I always immediately think of development — human adults and human children look noticeably different. How could you get from one to the other without dying? OK, maybe teenagers are a transitional creature, but they usually cope without dying, even if they tell you everyday that they are, often out of embarrassment at their parents.

It’s an insular kind of reasoning that asserts facts that aren’t true to justify an unwarranted conclusion, which is the real point of this book. It’s not about dinosaurs, it’s about proselytizing for Jesus. 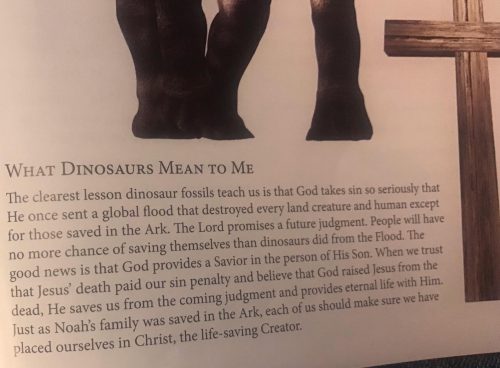 Great. God is obsessed with sin…so what sin did the dinosaurs he killed commit? We know what the punishment dealt out to all the living beings in the world was, but there ought to be some specific association with a crime to justify the death penalty. This was no life-saving Creator, this was a mad god who went on a violent murder spree.

I’ll also remind you all that dinosaurs aren’t in the Bible, and this is a whole book about dinosaurs, so this is not a satisfactory conclusion.