I get solicitations to publish papers all the time, and I just roundfile ’em. There are journals that are desperate for suckers to pay them to publish their work, and they’ll accept anything. We call them predatory journals, but I have a reservation about that: the whole establishment scientific publishing system is predatory, taking the federally funded output of scientists and billing them so that they can publish. But some are more lacking in discrimination and prestige than others, and have lower standards to the point of absurdity.

Dan Phelps got invited to publish in the International Journal of Paleobiology & Paleontology, which sure sounds like Serious Science, but he took one look at their table of contents and could tell this was a garbage dump. Do you notice anything funny about it? 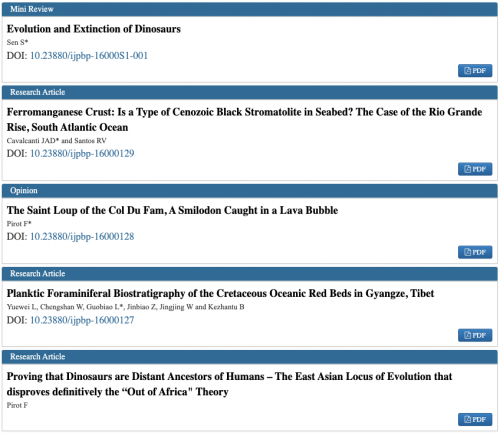 When accused of being a predatory journal, they have a curious response.

Thank you for your reply, We would like to inform you that ours is not a predatory journal. We have received the ISSN which is provided in our previous email. For your convenience, we are providing the link of our journal where you can find complete information of our journal and Editorial Board members. Link: https://medwinpublishers.com/IJPBP/index.php Kindly revert back if you have any queries. Look forward hear from you soon. Kind Regards, Jackie Crystal Assistant Managing Editor

They can’t be a predatory journal, they have an ISSN! The International Standard Serial Number just means they registered with an organization that issues unique ID numbers to periodicals, magazines, newspapers, even blogs (kinda expensive with no big advantages, so we don’t have one here), and the organization itself says, “it does not guarantee the quality or validity of the contents”.

Some of those titles are dead giveaways, though, and I felt like digging into them a bit. Here’s a fun one, Proving that Dinosaurs are Distant Ancestors of Humans – The East Asian Locus of Evolution that disproves definitively the “Out of Africa” Theory. The title alone tells you that this is nonsense, and that there was no peer review, and that the journal will publish anything.

It was written by Florent Pirot, who is an independent researcher — that means he isn’t a professional employed by any relevant institution. That’s fine, amateur scientists are welcome, but all you have to do is read the abstract to see there’s no substance here.

The study of evolution is clad with vivid debates and each new fossil brought back from ground studies can start a debate, with the ever-existing risk of creative artists looking for celebrity and building dangerously resembling creatures out of thin air. There nevertheless is a very significant, and simple, way, to demonstrate that the parentry of humans is not to be found in the mice of the Jurassic that are presented to be the founding mammals in the mainstream theory but that big dinosaurs that escaped the -65 MY disasters slowly evolved into standing mammals and that our genes are more related to these mammals. Existing literature from PNAS and Science is brought together with the analysis of the author to prove the point.

That doesn’t say anything. He is saying in clumsy English that humans descended from dinosaurs that escaped the KT extinction, but he doesn’t say what he’s going to do in this paper. It’s just as well; this is going to be an exercise in pareidolia and random leaps of logic. For instance:

In Central Asia and Mongolia, the findings of the Nemegtosaurus in the Nemegt Basin show parentry with aurochs, based on the skull, and suggest a farther relation with oreodonts. The skull’s eyes (in the model presented in the Polish Academy of Sciences Evolution Museum) are below two circular areas that obviously were fitted with horns that were perhaps renewed each year, as in deers today. The prominence of the jaws suggests a link with Theropithecus gelada. 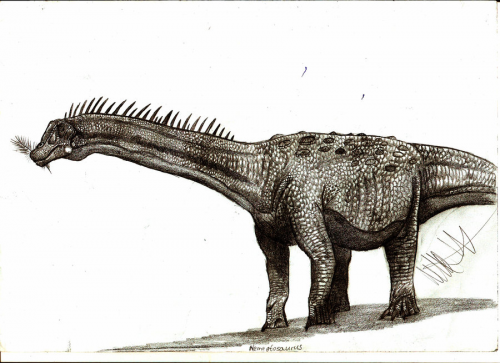 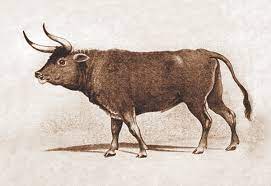 Anyone care to tell me where they show “parentry”? Because Mr Pirot doesn’t.

This, by the way, is Theropithecus gelada, the gelada baboon. I don’t see anything about the jaws of baboon, aurochs, and dinosaur that suggest a link, other than the general one, that they all have jaws. 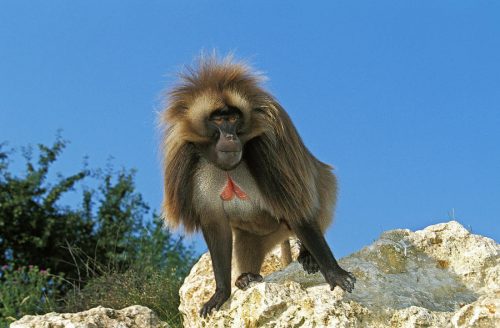 Then he gets to his “data”. This, for instance, is a Parasaurolophus beak remain incrusted in the crystallized magmatic rock. Picture taken in Valbonne, from local supply of rocks. 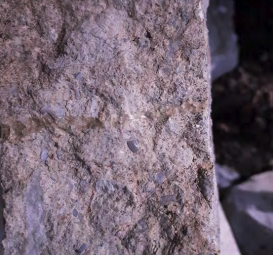 Another “fossil,” Theropitecus Gelada skull also molded in magma, from the same rock supply as above, estimated to be 10 to 12 MY old: 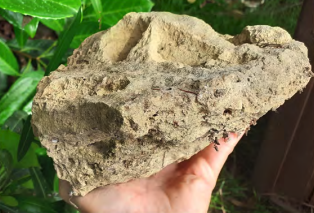 No, that’s not a baboon skull.

Read further and you find that Florent Pirot is a silly man who putters about in his yard in Valbonne, France looking at random rocks and imagining similarities with various species that he has read about, linking them in imaginary patterns of descent that he can’t justify.

He’s a French Ed Conrad or Roger Spurr! He’s one up on them because he managed to publish a couple of papers on his bizarre ideas in a garbage journal.

Yes, more than one. Here’s another you’ll find entertaining: The Saint Loup of the Col Du Fam, A Smilodon Caught in a Lava Bubble. He’s got lots of pictures of rocks that he fancies to be dramatic fossils, like this one of a teeth. 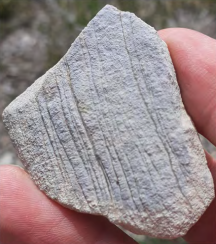 Ha ha, you may laugh, but keep in mind that this is delusional kook who is being preyed upon by a journal that charges substantial page fees (I don’t know what this one charges, but typically it’s on the order of hundreds of dollars) to put his mad ideas in print. If you can be outraged that televangelists bilk donations out of the poor to build their media empires, you should recognize that this is exactly the same thing, simply substituting Science for Jesus.

The other thing that should annoy you is some creationist wanker like Matt Powell will seize on this and wander about telling people that those stupid evilutionists believe dinosaurs evolved into a baboon evolved into humans when no, we don’t. Some bête imbécile in the South of France thinks that, and a criminally fraudulent journal is parasitizing him.