OK, so atheists shouldn’t take credit for a decline in religion, but I think science communicators and educators (which is not synonymous with atheism, I’m sure you know) have accomplished something: the gradual decline of creationism. More people are accepting evolution! 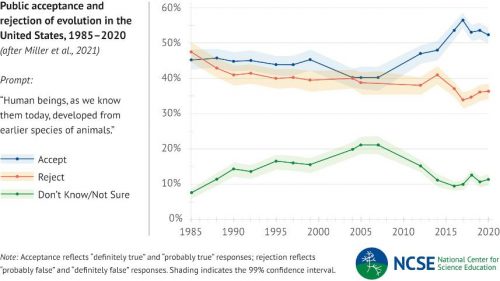 In the early years of this blog, way back in the 2000s, I felt a bit of frustration and despair because when I looked at the surveys, all I saw then was a flat line: less than half the population accepted a well-supported scientific fact, and 40% openly rejected it in favor of nonsense contradicted by all the evidence. And the statistics were flat-lined back into the 1960s, when the surveys began! It was all very discouraging, but also motivated a lot of us to get out there and do public science communication. It seems to have worked.

Antievolutionism remains a political force. The Republican party often panders to religious fundamentalism, and attitudes toward evolution are politicized as a result. Miller and his collaborators found that 34% of conservative Republicans accepted evolution in 2019, as compared to 83% of liberal Democrats. There is evidence that the politicization is increasing: in 2009, 54% of Republicans and 64% of Democrats accepted human evolution, but by 2013, the ten-point gap widened to a twenty-four-point gap, according to the Pew Research Center.

That tells me it’s just as important as ever to work to make sure citizens accept evolution for the right reasons. Because that’s what the evidence supports.

What would we do if we discovered the world was going to end? » « As our holiday season winds down, give thanks that America is destroying religion