Just in case you think my last post was too pessimistic, here’s the latest news from Antarctica.

This week, ice scientists meeting in New Orleans warned that something even more alarming was brewing on the West Antarctic ice sheet – a vast basin of ice on the Antarctic peninsula. Years of research by teams of British and American researchers showed that great cracks and fissures had opened up both on top of and underneath the Thwaites glacier, one of the biggest in the world, and it was feared that parts of it, too, may fracture and collapse possibly within five years or less.

Thwaites makes Larsen B look like an icicle. It is roughly 100 times larger, about the size of Britain, and contains enough water on its own to raise sea levels worldwide by more than half a metre. It contributes about 4% of annual global sea level rise and has been called the most important glacier in the world, even the “doomsday” glacier. Satellite studies show it is melting far faster than it did in the 1990s.

Thwaites is worrisome, but there are many other great glaciers in Antarctica also retreating, thinning and melting as the Southern Ocean warms. Many are being held back because Thwaites acts like a cork, blocking their exit to the sea. Should Thwaites fall apart, scientists believe the others would speed up, leading to the collapse of the whole ice sheet and catastrophic global sea level rises of several metres.

The Thwaites glacier looks so small in the satellite view. All the white icy stuff piled up behind it looks even more ominous now. 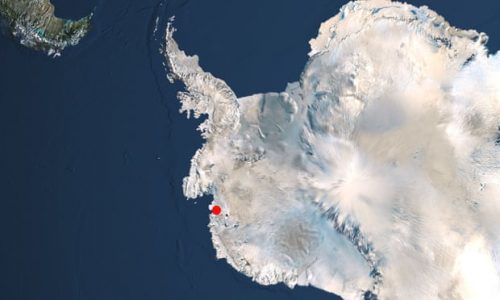 Satellite view of Antarctica with the Thwaites glacier marked in red.

Don’t panic! Governments around the world are leaping into action…or not.

Yet just one month after Cop26 ended in Glasgow, the warning that the 300-metre thick, 50-mile wide Thwaites glacier has started to crack up has been met with silence from governments preoccupied by Covid-19 and the return of normal politics. The danger is that the many actions pledged in November to address global heating will be shelved for another year, to become just one more risk in an increasingly dangerous world.

Thwaites underlines that global heating and glaciers do not wait for politicians, and every year action to reduce climate emissions is delayed only accelerates global disaster.

Isn’t it reassuring that no matter how dismal I sound, reality is so much worse?

Yes! Grades done! » « The most important civics lesson they never taught us