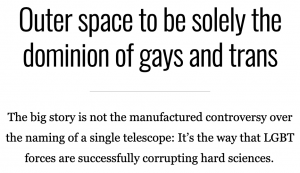 According to Lifesite News (as we all know, a highly reliable site), Outer space to be solely the dominion of gays and trans. Now it sounds spectacularly fun, but I guess I’m excluded, not being either. They really are discriminating against us cis-het folk! I’m also curious about the sexual orientation of Branson and Bezos.

The story goes on:

According to a growing number of astronomers, physicists, and major scientific journals, anyone who is not sufficiently pro-LGBTQ+ should be denied a presence in the cosmos.

There is a movement afoot within NASA to rename the much anticipated, $8.8 billion yet-to-be-launched James Webb Space Telescope (JWST). Why? As a State Department official in the 1950s, James Webb opposed employing gays and lesbians, viewing them as security risks susceptible to blackmail.

Webb went on to become in 1961 the head of NASA, where he oversaw the Apollo program.

Because the race to beat the USSR to the moon was viewed as integral to winning the Cold War, the Apollo program had to be protected against vulnerabilities to Soviet interference.  Webb was responsible for implementing federal policy that included purging gays and lesbians from the NASA workforce.

That’s rather thin gruel of evidence for the extraordinary claim that all the straight people will be denied a presence in the cosmos. It’s a bit of a grand leap from suggesting that large space projects shouldn’t be named after bigots to whining that the straights have been banned from outer space.

You do know that the reason gay people were considered vulnerable to Soviet interference is because good ol’ American bigots would use information about people’s sexuality to find common cause with the nefarious Russkies and wreck our own programs, right? All they had to do was recognize that gay people could also be patriotic Americans to negate the threat, but Webb willingly went along with a plan to discriminate against gay folk, which suggests he shared that bigotry. It’s the presence of homophobes, like everyone at Lifesite news, that is the problem.

They also make the claim that LGBT corruption: Making the hard sciences soft, squishy, citing the fact (which is a fact) that statements about, for instance, the biology of men and women are more complicated to interpret than a simplistic, dishonest TERF can comprehend.

Scientific American regularly publishes articles that are political, not scientific, where LGBT ideology trumps intellectual curiosity, intellectual honesty, and solid research. Recent editorial headlines include Why Anti-Trans Laws Are Anti-Science, A Nationwide Ban Is Needed for “Anti-Gay Therapy,” and Gender-Affirming Health Care Should Be a Right, Not a Crime — all of which belong in the opinion sections of The Advocate or LGBTQ Nation, not a science journal.

Nature has appended notices to articles and social media postings, declaring, “Nature recognizes that sex and gender are neither binary nor fixed,” or some variation on that theme.

Science and policy are intertwined, so of course a science journal is going to take a stand on the intersection of science with politics. It is true that “intellectual curiosity, intellectual honesty, and solid research” support the idea that anti-trans laws are anti-science, because they are, and that “anti-gay therapy” doesn’t work and does more harm than good, and fucking of course gender-affirming health care should be provided to everyone who needs it. What is wrong with these people that think respecting the diversity of human identities should be a crime? It is anti-science to think it’s bad that scientific evidence repudiates their narrow-minded views.

As for Nature…it is entirely reasonable that they would qualify statements about the nature of men’s and women’s sexual and gender nature with a reminder that those properties are more fluid and complex. They are rightly concerned that, for instance, actuarial statistics that classify people into male and female categories will be misinterpreted as evidence that sex is rigidly binary by, for instance, bigoted readers like Lifesite News.

Case in point: they try to discredit the petition to change the name of the James Webb Space Telescope by implying that the people behind it are a bunch of weirdos.

The name-change petition was launched by the four astronomers, including one who identifies as ‘non-binary,’ an astrophysicist who uses the pronouns ‘she/they,’ and a professor of physics and astronomy who is also a core faculty member in women’s and gender studies who identifies as “queer and agender.”  The petition now has amassed 1,250 signatories, according to Nature.

But that makes the point for those scientists! These non-binary astronomers exist, and are speaking out and demanding respect as human beings; they are saying that you don’t get to pretend they can only be pure, ideologically conservative men and pure, ideologically conservative women. They are different, and don’t fit into the traditional pair of bins, and they are protesting the fact that people like them were discriminated against! Meanwhile, Lifesite News is not contesting the fact of discrimination, implicitly acknowledging that Webb was biased against them, instead just trying to justify it because we were in a space race against the Soviet Union.

It was a stupid race, anyway. Think what we could have accomplished with less competition and more cooperation, and with the assistance of more brilliant minds that just happened to have sexual preferences James Webb, and other hidebound administrators, didn’t like.

Why does it take so long to get them to do the right thing? » « Freethoughtblogs is ten years old!