Yesterday I discovered that I am scheduled to teach a course in person in the Fall, as I was putting together my syllabus and organizing my materials for an, I thought, online class. Ooops. I asked the administration if I could instead teach it online; no, they said, the students signed up for a real live genuine classroom experience, so you’re stuck with it. Oh well. At least I’ve got their written denial, which I’ve passed on to my wife, so if I die or am crippled by COVID-19 this year, my heirs will have some legal recourse for restitution.

I am puzzled by how smart people all across the country can make such stupid decisions. As soon as infection rates start declining, they rush to dismantle every decision that made that reduction possible, and woosh, COVID comes roaring back with a new variant, and only after the numbers rocket up again do they start implementing what they should have done all along.

Even the far-right is conceding that vaccinations, at least, are necessary.

On Tuesday, Senate Minority Leader Mitch McConnell told reporters, “shots need to get in everybody’s arm as rapidly as possible” and asked that people “ignore all of these other voices that are giving demonstrably bad advice.” House Minority Whip Rep. Steve Scalise of Louisiana, got the vaccine after months of delay and then publicly said, “there shouldn’t be any hesitancy over whether or not it’s safe and effective.” And Fox News host Sean Hannity, in a widely shared video, declared, it “absolutely makes sense for many Americans to get vaccinated.” This was treated in the press as an unequivocal endorsement, even though the use of the word “many” was clearly meant to let the Fox News viewers feel like he’s talking about other people getting vaccinated.

That’s from Amanda Marcotte, who points out how superficial this “endorsement” is — they are setting up plausible denial, nothing more, and continuing to promote vaccine denial for their hardcore supporters. They have to have a soundbite on record so that when journalists point out that their bad ideas are killing people, they can pluck that one sentence out to show that, see, it’s not our fault.

All this shows is that GOP politicians and pundits still know how to manipulate the mainstream press’s endless desire to believe the Republicans aren’t really as bad as the #resistance tweeters are saying. But while clips of prominent Republicans saying pro-vaccine stuff might be enough to get the press off their backs — or keep Biden from accusing them of “killing people,” as he did (correctly) to Facebook — it won’t be enough to actually get vaccine-hostile Republican voters to change their minds. Indeed, this should be understood more as a P.R. move to quell press criticism than a sincere effort to get reluctant people to get vaccinated.

Unlike most journalists — who merely watch clips from Fox News, often ones pre-selected for them by the Fox News P.R. team — Matt Gertz at Media Matters and Aaron Rupar at Vox actually put in the miserable work of watching entire shows on the network. And both reported on Tuesday that, despite the hype around Hannity’s viral clip, the overall tenor of Fox News this week has still been that getting the vaccine is a very bad thing that no red-blooded Republican worth his MAGA hat should ever do. Indeed, the out-of-context Hannity clip comes from an episode that was overall anti-vaccine. The Hannity clip “came in the middle of a segment in which he railed against colleges and universities that are requiring their students to get their shots,” Gertz writes. He also points out that Hannity’s show “is bracketed between those of Carlson and Laura Ingraham,” and both of those hosts went hard on the vaccines-are-terrible-and-doctors-are-lying-to-you messaging. 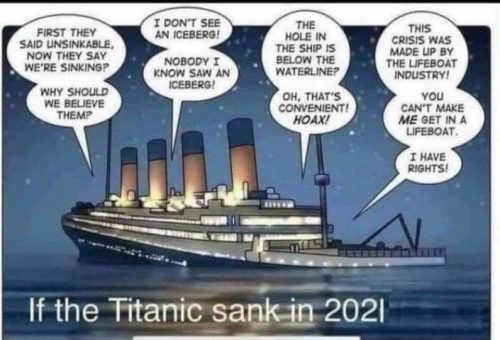 The universities are at least acknowledging that the boat is sinking, which is something, but they’re also telling the crew to get out there and arrange the deck chairs for the evening’s shuffleboard tournament.

I’m also sitting here wondering why I, a supposedly smart person, am just going along with a decision that puts me at greater risk, especially when a safer alternative exists.