At the height of the controversy surrounding Rep. Matt Gaetz (R-FL) and the revelations that he’s under investigation for sex trafficking, Rep. Marjorie Taylor Greene (R-GA) bet big on a nationwide joint fundraising tour with her embattled colleague. But new campaign filings show that not only did the gamble not pay off, but that the much-maligned Republicans actually spent four times as much as they raised. 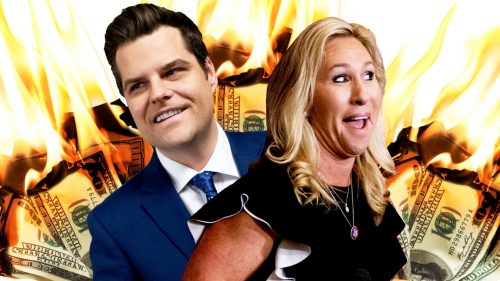 Try harder! You’ve got to spend money to make money!

That sort of meager haul would be fine for a dinner or one-time event, but Gaetz and Greene have repeatedly held high-profile events and spent a whopping $287,036.19 to hold them—meaning they’re in the hole by more than $225,000.

Keep digging, you two. I’m sure you can deepen that money pit to at least a million dollars with a little effort.

It’s not too late to join the American Humanist’s conference » « We don’t want to look frightened, you know