Steven Crowder, the right-wing “comedian”, was previously banned from YouTube for hate speech. They’ve lifted his ban, though, and he’s back in action. He’s been mocking pride week in his inimitably repulsive way.

Now, if we just look at it — look, with kids, you’re going to say, “OK, you’re born gay. You’re born straight.” Fine, let’s just go with that. But you overwhelmingly celebrate gay. If it’s just something that’s a part of you, it either shouldn’t be celebrated or certainly you wouldn’t celebrate the one of the two versions that results in HIV, more likely; AIDS, more likely; promiscuity, more likely; mental health issues, more likely, but lower domestic abuse with gay people, higher with lesbians.

My point is if you’re just going to celebrate, hey, the preference of friction, why wouldn’t you celebrate the one that makes for the most productive environment for children and has worked for perpetuating the human species since ever. That’s all I’m saying. I just don’t think you need — you’re like — you’re just like telling kids, “Hey, hey, isn’t it great? They’re gay.” What does that mean? It means they have sex in a way that doesn’t work.

Honestly, let’s look at all major historical gay figures. You look at Milk.

You look at Harvey Milk. You look at people, you look at [UNINTELLIGIBLE] — these are people with AIDS.

How dare those gay people, who all have AIDS and don’t make babies when they have sex and are unproductive, celebrate their survival in a culture full of asses like Steven Crowder?

Also, though, I have to ask…how is that funny? Why are they wearing stupid costumes? Does Crowder need a sycophantic claque to laugh at his jokes, because no one with half a brain will?

Wise up, YouTube. Make this guy gone. He’s not a comedian at all, he’s just a mouthpiece for hate. 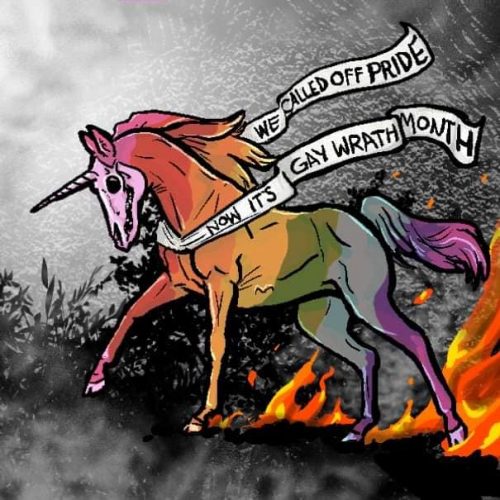