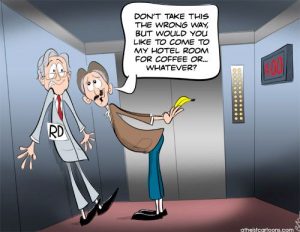 Oh boy, we get to relive Elevatorgate again. Thanks, Atheists for Liberty, for revisiting it.

You are a proud atheist in the emerging New Atheist movement attending one of the most impactful and energized conferences in your community. In June of 2011, you are in Dublin, Ireland, attending the World Atheist Convention, an event celebrating atheism, science advocacy, and secularism with some of the most famous freethinkers of the time.

<I wasn’t talking about you.>

Sheedy titled his little essay “Ten years after Elevatorgate | What we should learn from our past mistakes”, but unfortunately demonstrates that he didn’t learn much. He continues with his saga:

You enjoy the attendees and speakers so much that you stay up in conversation at the hotel bar until four in the morning. You see an attractive speaker retiring for the night, and you follow them to an elevator to ask them if they would like to join you for a cup of coffee.

Yes, I was in that hotel bar late at night, but I retired a little earlier, and no one followed me into the elevator.

<Another whisper: Not you.>

What, again? Are you saying I’m not an attractive speaker? It’s no fair. I never get addressed by my handsomeness, it’s always the women who get singled out for their appearance. I wonder if that says something about the culture…

Extremists! Destroyed! New Atheism! That speaker was Rebecca Watson, who shattered the nascent atheist movement with the four little words, “Guys, don’t do that.” So much power. Such extremism. Sheedy even quotes Rebecca’s vicious, hateful commentary, as if he is oblivious to its actual mildness.

Um, just a word to the wise here, guys, don’t do that. I don’t really know how else to explain that this makes me incredibly uncomfortable, but I’ll just sort of lay it out that I was a single woman, you know, in a foreign country, at four a.m., in a hotel elevator with you, just you. I, don’t invite me back to your hotel room right after I’ve finished talking about how it creeps me out and makes me uncomfortable when men sexualize me in that manner.

Yes. Like when commentators think it’s perfectly natural for a man to follow an “attractive speaker” into an elevator and ask them to join them in their hotel room. And for half the atheists in the world to erupt in rage at the idea that a woman might question their right to hit on them.

The idea that the New Atheist movement was systemically sexist is a blatant lie.

Sorry. It was and is systemically sexist, but for one brief moment we extremists thought it could get better, that there was hope for some introspection and growth. We were wrong.

Claims like the ones these infiltrators have made over the years only hinder our community, a community that so many of us fought to develop. If anything, these infiltrators downplayed the problems of real systemic sexism that still exists in other parts of the world, as explained by Richard Dawkins in a sarcastic response to Watson, in what became known as the “Dear Muslima letter:’’

Yeah, he then quotes the “Dear Muslima letter” and says that Dawkins was right.

Here’s the deal. Sheedy keeps talking about these “extremist infiltrators”, but they weren’t infiltrators. We were there all along. That “impactful and energized conference” featuring “the most famous freethinkers of the time”? That included people like Rebecca Watson and me. We didn’t sneak in a side door, wearing disguises. We were part of the movement, and we had helped popularize it. We also weren’t particularly extreme — suggesting that women should be just as respected as men is not a particularly radical idea.

But of course saying that there is a real systemic sexism that still exists in other parts of the world implies that there is no sexism in America or Europe. He claims that atheist circles downplayed the injustices of the Islamic world. Many of the extremist infiltrators have silenced or critiqued criticism of Islam by non-woke atheists. This is not true. That there is sexist injustice in the Islamic world does not imply that the non-Islamic world is free of them. I read somewhere, “Why do you focus on the speck that is in your brother’s eye, but do not consider the beam that is in your own eye? How will you tell your brother, ‘Let me remove the speck from your eye,’ when, in fact, you have a beam in your own eye? Hypocrite!” We should be working on both the specks and the beams, you know.

After their success in taking over the movement five years later,

Wait, what? Rebecca Watson took over the atheist movement? Or maybe it was me. I don’t know, he keeps snubbing me because I’m not attractive enough, but you never know — maybe I’m secretly in charge now. He keeps talking about these extremist infiltrators who have taken over, but he doesn’t name any. Is it Nick Fish, of American Atheists? Maybe Robin Blumner of CFI, who was put in charge after it merged with the Richard Dawkins foundation? Wait, Dawkins…? Could it be he’s the secret extremist mole? Not very likely.

But then he goes on to name all the types of people who’ve been thrown out of the atheist movement.

several groups of atheists, the majority of the movement’s supporters, men and women alike, were seen as pariahs at atheist conferences.

You know, all those kinds of people are still prominent in atheism. Rebecca Watson and I and many of the other people who spoke out against the casual (and sometimes not so casual) sexism and racism are out. I don’t know what he’s complaining about, since as far as I’m concerned, the assholes won. Have you looked at YouTube atheists lately? He could have been much more specific about who these pariahs are simply by listing the board of advisors for Atheists for Liberty.

That’s a real rogues gallery of racists, rapists, evolutionary psychologists, and dishonest scum. It’s as if they went looking for people who should be pariahs and tried to elevate them! These are the kinds of people who still get invited to atheist conferences, you know. When was the last time you saw Rebecca Watson or me at a conference? Or on the board of advisors for an atheist group?

Who were the extremist infiltrators who conquered the atheist movement again?

Wait, before I stop, look back at the title of Sheedy’s screed, What we should learn from our past mistakes. What has he learned?

Got it. So he’s going to reject tolerance, and not let feminists and egalitarians into his movement.

I never thought of a personal ad » « Why did YouTube allow Steven Crowder back on?