I used to appreciate Glenn Greenwald, back in the Bush years when he was a loud voice against the American war machine, defender of Chelsea Manning, etc. But then he got weird, and in his efforts to oppose the Establishment became increasingly aligned with what were fringe political perspectives that have since become mainstream Republicanism, and he never seemed to notice. He resigned from the Intercept because he thought they were neglecting marginal voices.

On Thursday, Greenwald penned a lengthy resignation letter ripping the publication he helped co-found, saying it is “completely unrecognizable” from its creation in 2014.

“Rather than offering a venue for airing dissent, marginalized voices and unheard perspectives, it is rapidly becoming just another media outlet with mandated ideological and partisan loyalties,” Greenwald wrote on Thursday.

So now, to avoid those “mandated ideological and partisan loyalties”, he has decided that the “marginalized voice and unheard perspective” he must support is that of… Tucker Carlson? 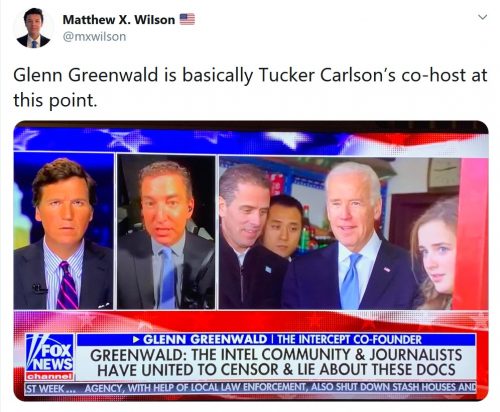 It’s good to see that I’m not the only one who has been dismayed by his strange and obvious rightward turn — not just a turn, by a headlong rush into the arms of Carlson and Jimmy Dore and other pundits who try to pretend to be brave centrists while parroting the Republican party line.

At this point, Greenwald seems to have almost no ideology besides reflexive contrarianism. Perhaps this is simply the end result of spending hours on Twitter every day for years, or spending two (or four?) years focused laser-like on the Russia inquiry. His incessant—and often finely detailed, and articulate—criticisms have transformed the man into a kind of fanatic.

More problematic, obviously, this tendency towards contrarian criticism has increasingly aligned him with the far right. Some of this can clearly be chalked up to the simplification of information within the context of social media; self-reinforcing media bubbles are created. But we pick our bubbles, and Greenwald appears to be comfortable with his niche.

It is worth noting that the rhetorical overlap between Greenwald and the far right was always there, but could, in the past, usually be plausibly discounted as both-sides hostility towards a corrupt elite—consider the comparisons between Trump and Bernie. Or at least that’s how I felt. No longer. Take a look at Greenwald’s Twitter feed, which reads as an unending stream of right-wing grievance against cultural liberalism, and/or specific and almost exclusive amplification of right-wing media.

Right now, he is just another media pundit with “mandated ideological and partisan loyalties” of the kind he deplored — and worse, he has incomprehensibly hitched his star to the wagon of Trumpism and far right conservatism. I’d say that’s too bad, but after four years of incontrovertible empirical evidence that that political wing is incompetent and evil, I just have to say … screw him.