If you ask fundagelical Christians about God’s sex, they are adamant that He is definitely male. It doesn’t make sense to me — to use the usual TERFy arguments, does “he” have a penis? Does “he” make small mobile gametes? Does “he” even have gametes? Is “he” a “born biological male”? How does this even work? I have to wonder if this supernatural being should even be regarded as possessing any of the characteristics of a physical person. We could ask whether he has two arms, two eyes, or ten fingers, or even needs eyes and fingers, but some Christians are obsessed with questions about whether “he” has an adequate penis. The smarter metaphysical types are content to argue that “his” masculinity is a matter of essence, not crude biological bits. 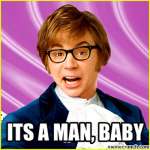 Austin Powers is an ass, so perfectly appropriate to use him to illustrate AiG.

“Smarter” is not a term often used for the rascals at Answers in Genesis, who are so committed to a superficial literalism that they believe their god created the world in precisely 6 days. Of course, to them, God is MALE. It says so in the Bible. So now they’ve published a twisty little essay justifying the fact that God is a man, baby. What this silly theology boils down to is this:

God uses male pronouns, therefore he is male. Well, that sure was easy!

The pronouns and verbs used in the Bible to describe God are always masculine, as are most of the nouns and images (Lord, King, Redeemer, Father, husband):

The Lord is slow to anger and abounding in steadfast love, forgiving iniquity and transgression, but he will by no means clear the guilty, visiting the iniquity of the fathers on the children, to the third and the fourth generation.’ (Numbers 14:18)

Our Redeemer—the Lord of hosts is his name— is the Holy One of Israel. (Isaiah 47:4)

For your husband is your Maker, whose name is the Lord of armies; and your Redeemer is the Holy One of Israel, who is called the God of all the earth. (Isaiah 54:5)

Pray then like this: “Our Father in heaven, hallowed be your name.” (Matthew 6:9)

For this reason I bow my knees before the Father, from whom every family in heaven and on earth is named (Ephesians 3:14–15)

he who is the blessed and only Sovereign, the King of kings and Lord of lords, (1 Timothy 6:15)

Well, that’s easy. It’s probably sacrilegious to ponder the length of God’s penis, or his sperm count, or his testosterone levels, so let us respect his privacy and avoid all the discussion of genitals, or which restroom he’s allowed to use when he urinates. I hope AiG applies the same courtesy to their fellow humans.

I do have to note that the essay does briefly nod at the idea that their god’s masculinity is a metaphor, and that most scholars agree with that, but only to immediately dismiss it on the authority of someone named John C. P. Smith. AiG is not going to tolerate any weakening of the literal language of the Bible!

Some may argue that it is true that God is presented as male but that this is only metaphorical language used to describe God’s character. Even though the modern scholarly consensus seems to suggest this latter view is correct, it is by no means a unanimous view. Pastor and Old Testament scholar John C. P. Smith gives several good reasons to think this is not the case: (1) God consistently and repeatedly represents himself as male making a deliberate assertion about his nature; (2) The presentation of God as male throughout the Bible is ubiquitous and supports the notion that his maleness is a reality and not a metaphor; and (3) the term Father is not simply one metaphor among others in the Bible: it is what God in actuality is for his worshippers.

Note, of course, that god’s masculinity is entirely a product of what words he chooses to use to describe himself, which seems fair. You might wonder who John C. P. Smith is — I never heard of him, but he’s a pastor in the UK who writes articles for — you guessed it — Answers in Genesis. He’s not a guy who was privileged to peek under God’s robes.