Donald Trump has been kicked out of the Screen Actors Guild! Boo-hoo. You can tell it burns him, though, since he felt compelled to write back with a “you can’t fire me, I quit!” letter. It’s so pathetic and petty, just like Donald himself. 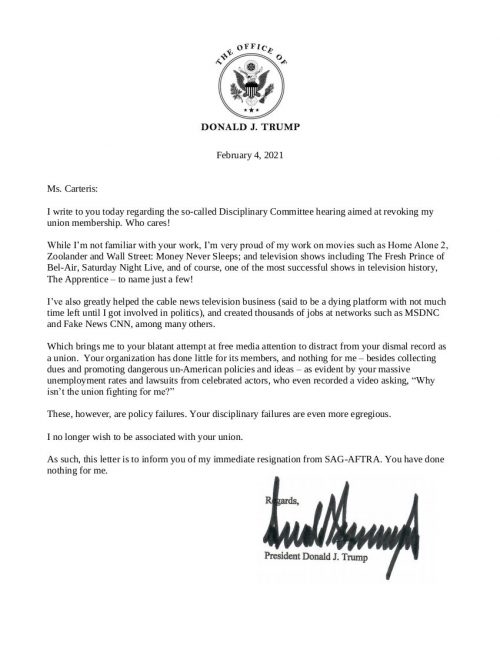 I write to you today regarding the so-called Disciplinary Committee hearing aimed at revoking my
union membership. Who cares! [You do, Donald, you do]
While I’m not familiar with your work, I’m very proud of my work on movies such as Home Alone 2,
Zoolander and Wall Street: Money Never Sleeps; and television shows including The Fresh Prince of
Bel-Air, Saturday Night Live, and of course, one of the most successful shows in television history,
The Apprentice – to name just a few! [He just has to pat himself on the back. His little cameos were’t that impressive]
I’ve also greatly helped the cable news television business (said to be a dying platform with not much
time left until I got involved in politics), and created thousands of jobs at networks such as MSDNC
and Fake News CNN, among many others. [He thinks that because he was such an asshole that news agencies had to report on all of his lies, he deserves credit for their work]
Which brings me to your blatant attempt at free media attention to distract from your dismal record as
a union. Your organization has done little for its members, and nothing for me – besides collecting
dues and promoting dangerous un-American policies and ideas – as evident by your massive
unemployment rates and lawsuits from celebrated actors, who even recorded a video asking, “Why
isn’t the union fighting for me?”
These, however, are policy failures. Your disciplinary failures are even more egregious.
I no longer wish to be associated with your union.
As such, this letter is to inform you of my immediate resignation from SAG-AFTRA. You have done
nothing for me.

Poor baby. Even better, though, is SAG-AFTRA’s reply, which is short and sweet.

It’s so nice to see every little cut delivered as Trump falls.