How about a happier story? About finding treasure?

A fellow in upstate NY bought an old building and was renovating it, when he discovered an attic that had been closed and sealed over with drywall for about a century. He peeled away the old drywall, climbed up, and found… 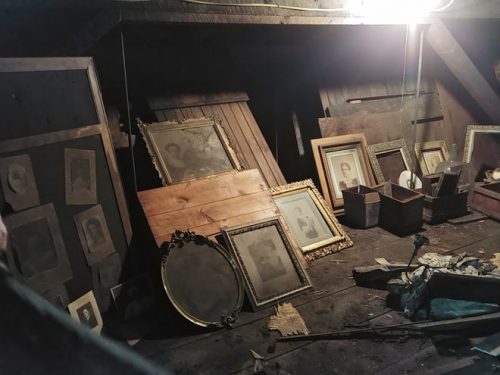 He turned to Boni and said, “I think we just found the Goonies treasure.”

They had uncovered contents of a turn-of-the-century photography studio, complete with props, chairs and backdrops. Boni said he didn’t recognize suffragist Susan B. Anthony or any of the other people featured in the dozens of photos he helped remove from the attic.

It had been owned by James Ellery Hale, a photographer from the turn of the previous century who was well known for his photos of the suffragette movement, so there are all these dusty photos and photographic plates of Susan B. Anthony and Elizabeth Cady Stanton and other, not yet identified figures of the early movement. This is amazing.

I checked out my house’s attic (it was built in the 1940s), but I’m afraid all I found was mouse poop and fiberglass insulation, darn it. But we do have a lot of old buildings in Morris, and now I’m wondering what treasures we could find if we had access.

They’re full of spiders, I bet!

Dance while the world burns » « Facebook is irresponsible, Zuckerberg deserves to rot in hell