A revolution can be a good thing — after all, this country was founded by one. When that collection of rascals signed the Declaration of Independence, they knew that putting their name on that piece of paper was a deep commitment. They were either going to go through with their grand plan, or it was going to be a damning piece of evidence when King George III put them on trial, and the penalty otherwise was going to be hanging, prison, or at the very least, complete financial ruin. As Ben Franklin said, “We must, indeed, all hang together or, most assuredly, we shall all hang separately.” They knew what they were doing, and the stakes were extremely high.

This was not the case in yesterday’s insurrection. Instead we had a mob of Confederate LARPers with no guiding ideology other than QAnon insanity and a philosophy of libertarian selfishness, with no plan for what they wanted to achieve other than to keep a demagogue in office, a demagogue who also happened to be a demonstrably incompetent buffoon who waddled through the last four years doing nothing but wrecking government while enriching himself and his cronies. It was embarrassing. They had no idea what they would do if they “won”, and didn’t even have a clear idea of what “winning” would be. They were just an instance of bumbling chaos.

But like those founding revolutionaries of the US, we know some people who eagerly signed on to that chaos. We know many people who were part of the chickenshit insurrection. Like Donald Trump.

For hours, Trump made little effort to quell the violence he had helped instigate, finally sharing a video at 4:17 p.m. in which he told people to “go home” — while continuing to promote the falsehood that he had won the election.

And Ted Cruz. And Josh Hawley, who saluted the rioters. And Marco Rubio and Rick Scott, who threatened to challenge the election results. And this man. 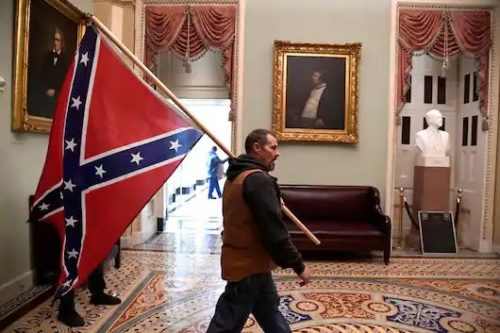 And every MAGA-hat wearing, Q-slogan-chanting, gun-toting asshole who thought storming the capitol was a fun way to spend the day. They all signed their name to a commitment to criminal insurrection, without thinking it through. When they yell, “GIVE ME LIBERTY or give me death,” they kind of overlooked the second half of the phrase, which is a conscious expression of their awareness of the moral cost of the steps they have taken.

But no, they all think they can materially aid an insurrection, then the day after they’d just go back to their offices in congress, or back home to their gun clubs and bars, whether they won or lost. This was a weightless rebellion. A joke. A photo op for their Facebook accounts. Or, for the politicians, an opportunity to pander to the mouth-breathing yokels in their home districts, assuming they can get away with any criminal act as long as they’ve got enough idiot constituents to support it.

As Marcus points out, though, there are straightforward legal codes that spell out that conspiracy, sedition, and insurrection are illegal acts with severe penalties.

Whoever incites, sets on foot, assists, or engages in any rebellion or insurrection against the authority of the United States or the laws thereof, or gives aid or comfort thereto, shall be fined under this title or imprisoned not more than ten years, or both; and shall be incapable of holding any office under the United States

They want to challenge our constitutional government? Fine. But be aware that if they win, there are tremendous obligations to build a new government; if they lose, there is a tremendous personal cost to the rebellion. They gambled. They lost. It’s time to pay the price.

Trump needs to be arrested and tried immediately. His Republican co-conspirators need to lose their seats in the Senate. They all need to spend some time in prison, and never be allowed to run for office ever again.

It’s really that simple. If the Democrats won’t grow a spine and enforce the law, then be prepared for more half-assed rebellions by dumbass conspiracy theorists for year after year.

Who attempted a coup? The Nazis, that’s who » « TREASON