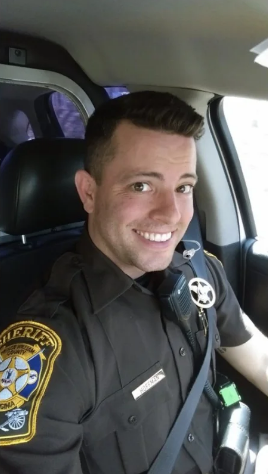 Oh look! It’s Officer Friendly! He looks nice, all clean cut and smiling, like he belongs on a poster for community outreach.

He has a Parler account where he brags about wanting to murder nurses who give vaccines, and an assortment of liberal politicians. He wants to smash down their doors and shoot them.

He has quite the gun collection, naturally.

my advice would be that when you post pictures of your arsenal alongside threats to kill judges, keep your government-issue work vest that says SHERIFF on the front of it out of the picture, but what do i know. pic.twitter.com/vPYpILhJSL

He has also been fired. 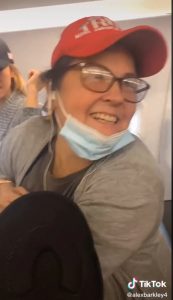 Oh look! It’s a cheerful white woman! She’s some kind of upper-level Karen, though. Notice the Trump hat, and the mask shielding her chin in case it explodes. It’s not obvious from the photo, but she got her picture snapped as she was saying, “Have a nice day, n****r!”

She had boarded a plane in Seattle and refused to wear a face mask during the flight. She just stood there grinning, forcing the airline to disembark all the other passengers so the police could kick them off the plane.

Trump supporters use the n-word after refusing to wear masks on a plane pic.twitter.com/VwBCnclOcW

She and her friend have been banned for life from ever flying on Frontier Airlines.

Yeesh. Happy smiling white people are the scariest monsters of them all.

I presume he’ll be arrested and tried for treason and extortion now? » « I haven’t cleaned the trinoc since when?