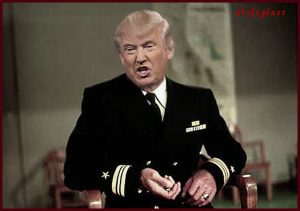 Ha ha ha ha ha ha ha ha ha. The presidential candidate who infamously claimed he could “stand in the middle of Fifth Avenue and shoot somebody” and not lose any voters is putting his belief in his immunity to the test by openly trying to convince the Georgia secretary of state to change the election results to make him the winner. Just like that. It’s an attempted coup, right in front of our eyes, in a recorded phone call, and the response of a select subset of Republicans (like Cruz and Rubio and Rand) is to refuse to recognize the criminality, and instead conspire to overthrow the certification of the results in the Senate.

The Post reports: “President Trump urged fellow Republican Brad Raffensperger, the Georgia secretary of state, to ‘find’ enough votes to overturn his defeat in an extraordinary one-hour phone call Saturday that election experts said raised legal questions.” In the call, Trump asked Raffensperger to change the certified vote that was subject to multiple recounts: “So look. All I want to do is this. I just want to find 11,780 votes, which is one more than we have. Because we won the state.”

In fact he threatened him. The Post reports, “During their conversation, Trump issued a vague threat to both Raffensperger and Ryan Germany, the secretary of state’s general counsel, suggesting that if they don’t find that thousands of ballots in Fulton County have been illegally destroyed to block investigators — an allegation for which there is no evidence — they would be subject to criminal liability.” Trump, sounding like a mobster as he often does, said, “That’s a criminal offense. And you can’t let that happen. That’s a big risk to you and to Ryan, your lawyer.” Nice career, there Brad. Shame if anything happened to it.

You can listen to, or read the transcript of, Trump’s hour-long phone call.

It’s an embarrassing spectacle. Trump is whiny and desperate, a rat frantically scratching at the walls of his cage, accusing the FBI and everyone else involved in verifying the results dishonest and incompetent, bringing up every ridiculous conspiracy theory he found on Twitter, just lashing out absurdly. This was Trump’s Captain Queeg moment, and he’s caught in this recording rolling his ball bearings around and looking like a demented fool.

Trump and Meadows dominated the phone call, talking non-stop and mostly incoherently. When he could get a few words in edgewise, Raffensperger quietly shot down all of Trump’s accusations. Here’s a few words from the Georgia secretary of state.

Well, I listened to what the president has just said. President Trump, we’ve had several lawsuits, and we’ve had to respond in court to the lawsuits and the contentions. We don’t agree that you have won. And we don’t — I didn’t agree about the 200,000 number that you’d mentioned. I’ll go through that point by point.

What we have done is we gave our state Senate about one and a half hours of our time going through the election issue by issue and then on the state House, the government affairs committee, we gave them about two and a half hours of our time, going back point by point on all the issues of contention. And then just a few days ago, we met with our U.S. congressmen, Republican congressmen, and we gave them about two hours of our time talking about this past election. Going back, primarily what you’ve talked about here focused in on primarily, I believe, is the absentee ballot process. I don’t believe that you’re really questioning the Dominion machines. Because we did a hand re-tally, a 100 percent re-tally of all the ballots, and compared them to what the machines said and came up with virtually the same result. Then we did the recount, and we got virtually the same result. So I guess we can probably take that off the table.

I don’t think there’s an issue about that.

Well, Mr. President, the challenge that you have is the data you have is wrong. We talked to the congressmen, and they were surprised.

But they — I guess there was a person named Mr. Braynard who came to these meetings and presented data, and he said that there was dead people, I believe it was upward of 5,000. The actual number were two. Two. Two people that were dead that voted. So that’s wrong.

Mr. President, they did not put that. We did an audit of that, and we proved conclusively that they were not scanned three times.

It’s a remarkable criminal performance by the president. It’s going to be our eternal shame if he is not prosecuted for his blatant abuse of power.

Why are we dawdling? » « Showing their teeth as a sign of smug arrogance