A pretty picture of a Peruvian hunter from 9000 years ago, bringing down vicuna with her atlatl and spear: 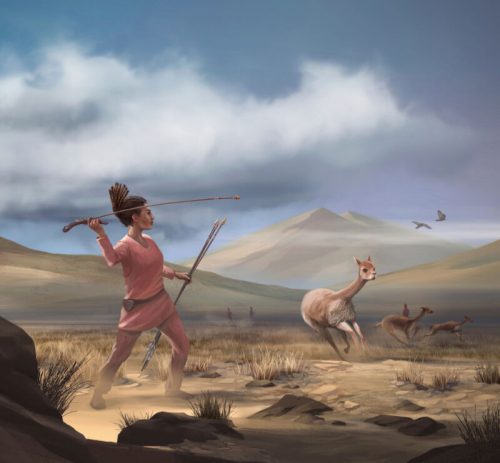 The image is based on the remains of the dead hunter, and an analysis of grave goods.

At Wilamaya Patjxa, an archaeological site in southern Peru, archaeologists unearthed the skeleton of a young woman whose people buried her with a hunters’ toolkit, including projectile points. The find prompted University of California Davis archaeologist Randall Haas and his colleagues to take a closer look at other Pleistocene and early Holocene hunters from around the Americas.

Their results may suggest that female hunters weren’t as rare as we thought. And that, in turn, reminds us that gender roles haven’t always been the same in every culture.

“The objects that accompany [people] in death tend to be those that accompanied them in life,” Haas and his colleagues wrote. And when one young woman died 9,000 years ago in what is now southern Peru, her people buried her with at least six stone spear tips of a type used in hunting large prey like deer and vicuña (a relative of the alpaca). The points seem to have been bundled along with a stone knife, sharp stone flakes, scraping tools, and ocher for tanning hides.

I also learned a new genetics fact! The bones were fragmentary, and the bits that you use for a morphological assessment of sex had crumbled to dust. But you can sex a skeleton by looking at the proteins that make up tooth enamel.

Tooth enamel contains proteins called amelogenins, which play a role in forming the enamel in the first place. The genes that produce these proteins are located on the X and Y chromosomes, and each version is slightly different. As a result, people who are genetically female have slightly different amelogenins than people who are genetically male. The proteins in the ancient hunter’s tooth enamel had a distinctly female signature, with no trace of the Y chromosome version.

The hunter from Wilamaya Patjxa is a young woman with the tools of an activity usually associated with men. If the objects people are buried with are the objects they used in life, then that raises some questions.

Maybe she was some weird outlier, I hear you ask. So they surveyed what was found at other grave sites, and it looks like a significant fraction of ancient hunters in the Western hemisphere happened to be women.

The hunter from Wilamaya Patjxa raises a similar question: was she the exception that proved the rule, or does her burial suggest that (in at least some ancient cultures) women were sometimes hunters? To help answer that question, Haas and his colleagues looked for other ancient people who had been buried with hunting tools. In published papers from archaeological sites across the Americas, they found 27 people at 18 different sites: 16 men and 11 women.

…the fact that so many apparent women turned up on that list is surprising. “Female participation in early big-game hunting was likely nontrivial,” wrote Haas and his colleagues. They suggest that as many as a third to half of women across the ancient Americas may have been actively involved in hunting.

The final line in this article is perfect.

Based on animal bones at Wilamaya Patjxa, large game like vicuña and taruca (a relative of deer) were extremely important to the community’s survival. In that case, hunting may have been an all-hands-on-deck activity. Haas and his colleagues also suggest that letting other members of a community keep an eye on the kids while the parents hunted might have freed more women up to bring home the bacon—or venison, in this case.

In other words, whether women hunted or fought probably depended on social factors, not biological ones.

I thought I ought to let David Futrelle know about this, since it makes the title of his blog even more ironic, but he beat me to it and has already posted about how She Hunted the Mammoth.

The Woke are gonna get you! » « Suck it, Jordan Peterson