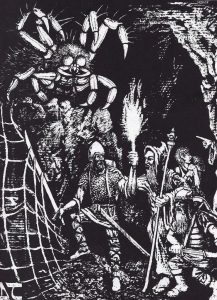 Someone sent me a link to this page about using spiders in Dungeons & Dragons…as monsters. I am offended!

That’s right those creepy crawly bitey little buggers with all the legs and all the eyes. I hate them IRL [OFFENDED!], and will terminate any that cross over the agreed upon barrier into my home [<gasp> OFFENDED!]. Its a feeling alot of folks the world over share and that is easily exploited for your tabletop game. Which I suggest doing. Its amazing. So here we go – using spiders to torture your players in the best and most memorable ways.

First we have to establish a few things, the biggest of which are the types of spiders found in the game that can be used. Most people assume we mean either the tiny version or the giant version. There is however so~ many spiders that are all canon in 5e so don’t be afraid to mix and match them up to create more diverse encounters. For this blog we will just be talking about spiders not Drieders or spider demons, though I think those are also great things to add to the mix to spice it up. Below is just a quick list of those that can be found in the books. These are create starting points for an easy mix up to the normal spider.

All right, if ever I were a Dungeon Master, first thing I’d do is replace all the player character races with that list. That’ll torture the players! Then I’d expand the list with more species of arachnids, and replace the Monster Manual with the Player’s Handbook.

Arguing with evangelicals is like wrestling with a bollard » « Oh no! It’s another Argiope video!