I find it hard to imagine something I’d want to do less than listening to a conversation between David Smalley and David Silverman, two awful people associated with the dying atheist movement. So I didn’t. Chris Johnson did, though, and came away with some of the choice wisdom of Silverman, who is considering voting for Trump because because of his position on race. 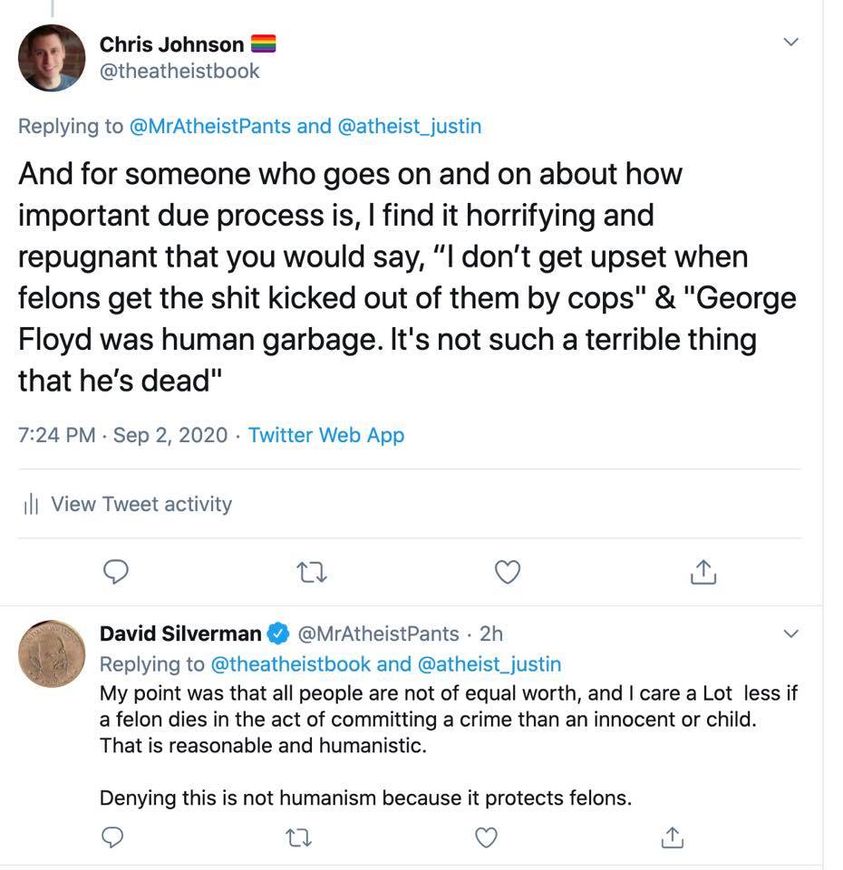 I don’t get upset when felons get the shit kicked out of them by cops
George Floyd was human garbage. It’s not such a terrible thing that he’s dead
My point was that all people are not of equal worth, and I care a Lot less if a felon dies in the act of committing a crime than an innocent or child. That is reasonable and humanistic.
Denying this is not humanism because it protects felons.

I was paired with David Silverman in a session at Oxford of a humanist conference, and I witnessed the reaction of the audience to his tirade. Let me just say — David Silverman is no humanist, and doesn’t have the slightest understanding of the philosophy of humanism. To say that humanism puts the value of human life on a variable scale in which you get to judge whether someone is allowed to live or die is not humanism. Furthermore, describing the actions of leftists in protesting racial inequity and police criminality to be “race-baiting” to a degree that you’ll vote for Donald Jackoff Trump does not make you a humanist — it makes you a racist, plain and simple. Those are not synonyms.

I wasted a decade of my life on this terrible gang of atheist assholes, why do they keep oozing up out of the muck to remind me? I have this dread that I’m either going to get killed by COVID or by the Republican lackwits that surround me here in Red Minnesota soon enough, and that’s what I’ll be thinking of as I go down. It’s depressing to be mired in regret at being both an atheist and an American, neither of which I can change.