It’s hard to believe, but it’s a valid question. Tyler Cowen demonstrates his arrogance by questioning the validity of epidemiology, and he asks a series of stupid questions that show how little thought he has put into the subject.

a. As a class of scientists, how much are epidemiologists paid? Is good or bad news better for their salaries?

You know, there’s this thing called “Google” which economists apparently haven’t heard about yet. If you look it up, it turns out that epidemiologists work in public health — which should already tell you they don’t get absurdly rich at this job — and they make on average about $69K per year. I would ask what the point of the question is. Does their salary say something about the accuracy of their conclusions? Because, near as I can tell, salaries under capitalism have nothing to do with intellectual rigor.

The employment of epidemiologists is not contingent on whether their results are good news or bad news, but on the quality and accuracy of their work. Why? Is it different for economists?

b. How smart are they? What are their average GRE scores?

Holy shit. Cowen reveals his own ignorant biases there.

Epidemiology requires solid skills in statistics and biology, neither of which are exactly easy-peasy topics. Their GRE scores were good enough to get them into demanding academic programs. There aren’t any shortcuts.

c. Are they hired into thick, liquid academic and institutional markets? And how meritocratic are those markets?

“Thick, liquid”? That sounds like economics jargon. I have no idea what he’s talking about, and I won’t pretend to know, unlike some.

I can say that academia is only loosely meritocratic. There are a lot of built-in cultural biases that mean we get some incompetent people, and some brilliant people get excluded. The question ought to be whether epidemiology is more or less meritocratic than economics. The evidence here says “more”.

d. What is their overall track record on predictions, whether before or during this crisis?

Crack an epidemiology textbook. There are a lot of variables and a lot of case studies. Unlike in economics, failed models tend to be rapidly discarded.

e. On average, what is the political orientation of epidemiologists? And compared to other academics? Which social welfare function do they use when they make non-trivial recommendations?

Fuck me. Like most educated academics, they probably skew liberal and Democratic. Their recommendations favor maximizing public health and minimizing death and illness. That’s their job. Economists seem to be much more twisted by flaky ideological concerns.

He has more questions, but I’ve had enough. What a chuzzlewit. 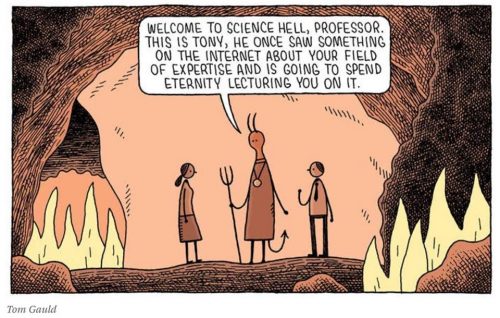