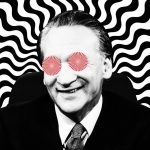 I knew there was a good reason I long ago stopped watching Bill Maher. His latest: furiously defending Tweety.

Maher claimed that all Chris Matthews did was make a poor “analogy” when he compared Bernie Sanders, a Jew, to the Nazis (“I hope the victims got some closure,” the comic sarcastically cracked); that Matthews was basically branded a “Klansman” for mixing up Jaime Harrison and Tim Scott, two African-American politicians; and that people overreacted to Matthews being “mean” to Elizabeth Warren when he pressed her on why people should believe Mike Bloomberg’s female accusers over the billionaire himself.

And then things got really ugly, as the HBO host targeted Laura Bassett, who accused Matthews of sexually harassing her when she was a guest on his program.

Isn’t it astonishing how being sexually harassed makes you a target again, if you’re forthright enough to tell others the truth? And how dinosaurs like Maher crawl out of the swamp to declare that he did nothing wrong?

According to Maher, Matthews “said some things that are kind of creepy to women,” continuing, “You know, I just, guys are married for a million years, they want to flirt for two seconds. He said to somebody, Laura Bassett, four years ago, she’s in makeup, he said, ‘Why haven’t I fallen in love with you yet?’ Yes, it is creepy. She said, ‘I was afraid to name him at the time out of fear of retaliation. I’m not afraid anymore.’ Thank you, Rosa Parks. I mean, Jesus fucking Christ! I guess my question is: Do you wonder how Democrats lose?”

I’ll tell you why Democrats lose: because they refuse to stand up for any robust principles of ethical behavior, favoring expediency over everything. Because “liberals” allow any old fraud, like Maher, to pretend to be the standard bearer for reason and virtue.

Then, every week, he brings in a goon squad of terrible conservatives with the pretense of balance.

One of his roundtable guests, the anti-#MeToo writer Caitlin Flanagan of The Atlantic, proceeded to further mock Bassett, saying of her, “How fragile can one woman be?” and insinuating that she was only booked on Matthews’ show because “she probably looked good on camera.”

Enough already. Maher is just a horrible faux-liberal shit-stirrer who provides a megaphone for even worse people. He belongs on Fox News.

Spiders gettin’ fat » « It’s not a telescope, but…