I learned something from our students. We have these introductory classes for incoming students, and one of them, led by Keith Brugger, was in part about measuring light pollution. So they went out and around Morris, using a meter to measure how dark the skies were in the evening. This is not something I knew anything about, but this week I learned about the Bortle Scale, which I suspect astronomers are already totally familiar with.

I’ve seen the Milky Way vividly outside of town (not in town, unfortunately), so I’d have guessed there are some places nearby that are around a 3 or lower — when we’ve wanted to check out interesting phenomena like the aurora or meteors we go just a few kilometers outside of town for good viewing. This survey produced a map of dark skies for us that suggest some changes. 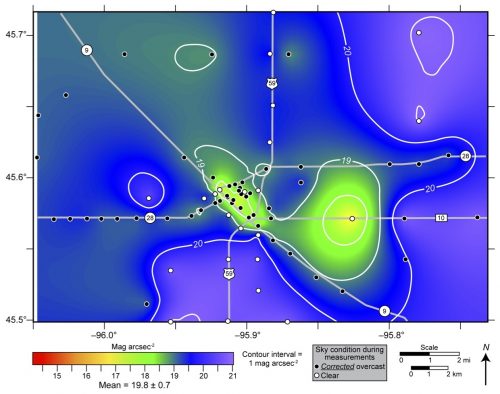 Morris is roughly at the intersection of Highway 59, which runs north-south, and Highway 28, which runs east-west. I’m used to driving 28, which is the route towards the big cities of eastern Minnesota, so we’ve often scurried out to a spot on 28 east of town to do our skywatching.

According to this map, though, we’d be better off driving south on 59, where it gets even darker. That makes sense — 28 has a small amount of road traffic, and there are itty-bitty farming towns scattered along it, while 59 north leads to Alexandria, has some farms with surprisingly bright lights around the buildings, and also leads to some big wind farms. There’s nothing south on 59. I’ve rarely driven that way, because it’s just empty for a long distance. So now I know where to go during the next meteor shower.

Hey, astronomers, you know this is a good place to live for your ilk! Come on out and stay a while!

Although there is a downside — if you come out with a telescope and go to the darkest regions on the map in the winter months, you’ll also find that it may be -20°C with a wind howling across the open fields.