I imagine the police would find a way to use astrology to simplify investigations.

“The victim was murdered on the 19th of November, at 6am, Chief!”

The chief consults a complex chart on the wall. “The killer had to have been a Virgo, with Mercury in the sixth house. That narrows it down! Quick, use the database to round up all the suspects!”

OK, maybe slightly exaggerated, but you’ve got to admit it’s not much of a reach for an institution that still uses handwriting analysis and lie detector tests. Now it’s revealed that they’ve also been using something called Scientific Content Analysis, or SCAN, a totally made up scheme for reading between the letters and lines of interview transcripts to get the interpretation the police want. 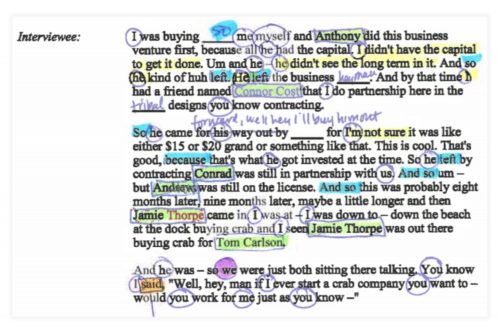 How does it work? Well, you need to spend a fair bit of money and get training to really understand it, but basically it’s a set of rules for plucking out quirks in a text and leaping to conclusions.

For Avinoam Sapir, the creator of SCAN, sifting truth from deception is as simple as one, two, three.

1. Give the subject a pen and paper.

2. Ask the subject to write down his/her version of what happened.

3. Analyze the statement and solve the case.

Those steps appear on the website for Sapir’s company, based in Phoenix. “SCAN Unlocks the Mystery!” the homepage says, alongside a logo of a question mark stamped on someone’s brain. The site includes dozens of testimonials with no names attached. “Since January when I first attended your course, everybody I meet just walks up to me and confesses!” one says. Acronyms abound (VIEW: Verbal Inquiry – the Effective Witness; REASON: REport Automated SOlution Notes), as do products for sale. “Coming Soon! SCAN Analysis of the Mueller Report,” the website teased this year. LSI offers guidebooks, software, kits, discount packages, cassette tapes of seminars and, for computer wallpaper, a picture of a KGB interrogation room.

It’s a classic pseudoscientific scam. Identify a population of gullible marks, in this case police departments all across the country. Promise an easy solution to a difficult problem. Require them to learn arcane and irrelevant rules for interpreting data. Get paid. Avinoam Sapir has been raking in the dough for decades with this scam.

One other interesting twist is that he’s marketing only to the police, so the general public is largely unaware of the garbage the police are using to snare putative “criminals”. And it’s working! There are people languishing in jail, convicted of serious crimes, because they used shorthand, abbreviations, and had sloppy handwriting!

He noted that while summarizing the day Hernandez disappeared, Joyner had not used the word “I,” writing, for example, “went home,” not, “I went home.” “That in itself is a signal of deception,” the detective wrote. Instead of writing “my girlfriend,” Joyner had written “a girlfriend.” What’s more, the detective wrote, Joyner’s handwriting was larger and more spread out in the answer’s last two lines than in the previous seven.

When asked why the police should believe his answers, Joyner had written, “I have nothing to hide.”

“This is not the same as stating I did not lie,” the detective wrote.

Well, at least they’re not using craniometry to determine guilt. I don’t think. Maybe there are cops wandering around passing judgment on the shapes of skulls, and we’re just waiting for ProPublica to do an expose.

The Spherical Spider » « George Church has a fancy hammer. You’re all looking a bit like nails right now