I have not been advertising this aspect of my research, but I have been striving towards developing a Perfectly Spherical Spider. Here’s my first success. 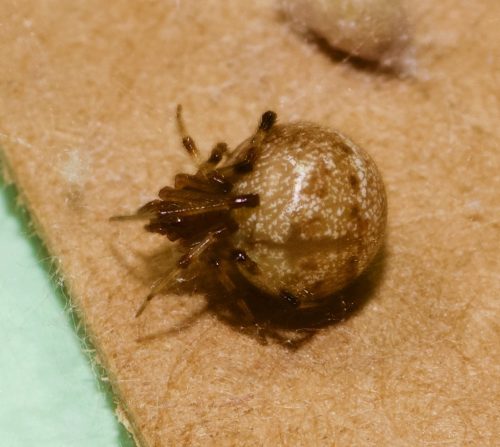 What good is a spherical spider, you might ask. The benefits are legion. For one, think of their utility in physics problems.

Actually, what happened is that I’ve started trying to breed the spiders with my impoverished bunch of small, young males, and because I was concerned about preventing nuptial cannibalism, I gave the lovely females a big banquet on their wedding night, and boy did they eat. It may have worked against me, because a) this female hasn’t budged in a couple of days, and I don’t think she can move, and b) the male I put in her cage gave every appearance of being fascinated and terrified, and orbited her at a distance of 5-10 cm. I’m hoping he might have darted in at some point over the weekend and done the deed, but who knows? I’ve pulled him out now and will place him with a possibly less intimidating female.

Isn’t she lovely, though?

Physicists: they make silken draglines, you could probably use spherical spiders in pendulum problems, too. You can’t do that with spherical cows!

Can I be in Generation Who-Gives-A-Crap? » « The police could always use horoscopes, dowsing, and psychics to find culprits