After I was done protesting yesterday (lie: we’re never done protesting), it was late, it had been a long day, and I was too tired to cook, so I just picked up some wraps at Subway. The Sandwich Artist, who is also a student at UMM, said, “Hey, aren’t you really into spiders?” Yes, of course, my reputation is spreading, I guess. “There’s a big spider on the window over there, it’s been here for several days.”

Of course I looked.

I came back this morning when the light was good, with my camera. There she was, with a big orb web against the glass…Argiope aurantia. 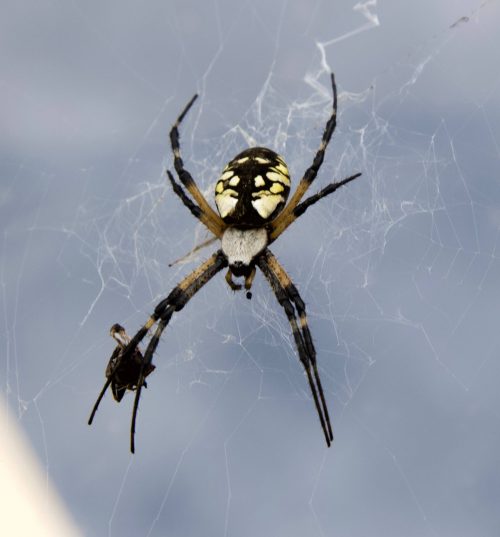 It was impressive, especially since it’s been so chilly lately. I noticed the stabilimentum on the web are rather disorganized and scraggly — a kind of disordered denser mess around the center of the orb here. But she was huge and pretty, and most conveniently right at eye height. This was shot with just my 17-85mm zoom lens, nothing fancy, and I’m tempted to go back later with my good macro setup and get some closeups.