Perkins said that teaching children about evolution is one cause of mass shootings.

“We’ve taught our kids they come about through chance through primordial slime and then we’re surprised they treat their fellow Americans like dirt!” he exclaimed. “It’s time we talk about the result of the left’s systematic march through our institutions, driving religious expression from the public square.”

Perkins complained that children are not being taught that they are “created in the image of God.”

“We’ve driving religion from our public life and we’re shocked that we no longer have morality and we no longer value human life,” he remarked.

As a totally godless human being who has been teaching about evolution for a few decades, I’ve noticed that I and my fellow biologists and atheists are less casual about taking life than our gun-totin’ Christian brethren in general. Evolution teaches that we’re kin to everything; it doesn’t bring us down, it elevates every living thing on the planet in our eyes. To claim that we have no morality is a lie. We have many of the same values that our fellow citizens do, we live quiet lives finding happiness in our families, our children, in service to others, in simple pleasures. Most Christians are the same way, except when their priorities have been distorted by misplaced fanaticism, which, unfortunately, the kinds of Christians who listen to Tony Perkins are fed constantly.

Take Representative Matt Schaefer of Texas, who has a similarly perverse and horrid idea of the “root of the problem”.

Godless, depraved hearts. That IS the root of the problem. Every person needs a heart transformed by faith in God through Jesus. May God be near to those suffering in Odessa and Midland, and everywhere that evil has struck a blow.

He is quite confident that the solution to everything is conversion to Christianity. Everyone must believe in Jesus to stop the mass shootings! As if no Christian had ever killed anyone senselessly.

The real root of the problem is this: that a fervently Christian legislator has decided that he must oppose all actions to restrict the “god-given” ownership of AR-15s. Apparently, the Christianity he wants us to convert to is the version that has all the followers of Jesus armed to the teeth. He’s going to do nothing but pray, and hand out more guns. 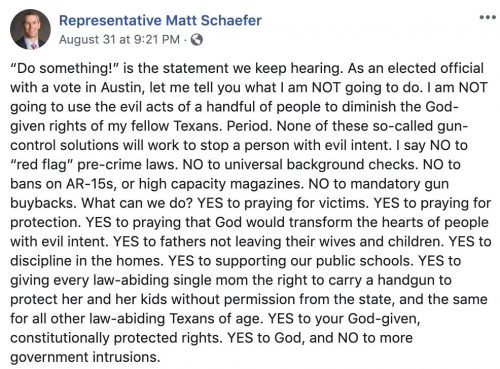 “Do something!” is the statement we keep hearing. As an elected official with a vote in Austin, let me tell you what I am NOT going to do. I am NOT going to use the evil acts of a handful of people to diminish the God-given rights of my fellow Texans. Period. None of these so-called gun-control solutions will work to stop a person with evil intent. I say NO to “red flag” pre-crime laws. NO to universal background checks. NO to bans on AR-15s, or high capacity magazines. NO to mandatory gun buybacks. What can we do? YES to praying for victims. YES to praying for protection. YES to praying that God would transform the hearts of people with evil intent. YES to fathers not leaving their wives and children. YES to discipline in the homes. YES to supporting our public schools. YES to giving every law-abiding single mom the right to carry a handgun to protect her and her kids without permission from the state, and the same for all other law-abiding Texans of age. YES to your God-given, constitutionally protected rights. YES to God, and NO to more government intrusions.

You know, the guy who went on a murder spree in Odessa and Midland doesn’t seem to have been either a vocal Christian or a vocal atheist — just another angry white man who loves guns. Maybe instead of trying to answer everything with stories about which religion they did or did not follow, we should be addressing the gun-worshipping cult that crosses boundaries between believer and non-believer.

One thing for sure, Matt Schaefer won’t be doing anything about that, because he’s a card-carrying member of that cult.

What if you put on a sh*t-show and nobody noticed? » « Bee-killer