A couple of white teenagers got a long, long profile in the Washington Post, which is part of the problem. What did they do to deserve all this attention? They pulled a “prank”, charging into their high school the night before graduation, and spray-painting swastikas and racist slurs on the sidewalks and buildings. 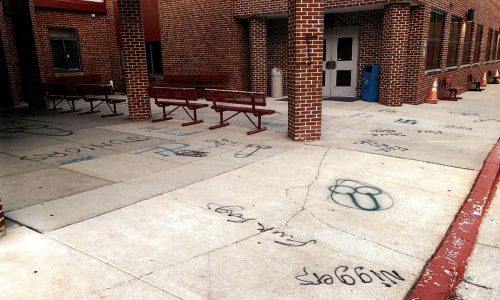 They went on a real spree. There’s anti-semitic, racist, and homophobic crap diligently sprayed everywhere, along with an occasional penis. They worked hard to splatter toxic crap everywhere, all with the intent to shock the families that would be visiting for the graduation ceremony. They thought this would be funny, a good joke, something that would be getting them attention, anonymously, they expected.

Unfortunately for them, security cameras recorded the whole ugly game, and worse, their cell phones automatically connected to the campus network, so authorities had their full identity the next day. It was a stupid act sabotaged by their own foolish ignorance, and the four kids were arrested and tried. That’s where it gets really noxious.

They pleaded innocent of a hate crime and racism. Their parents were in total denial that their good little boy was a poisonous bigot.

His understanding of the KKK was limited, too, he said. “Some people think it’s just a word, or a symbol or three letters put together. . . . But they were lynching people, hurting people for no good reason.”

Now, he said, he knows. But he still doesn’t believe his actions that night make him a bigot.

“I spray paint one racist thing and, suddenly, I become a racist? Just because I did it doesn’t mean I hate Jews, gay people or black people.”

He was standing before the judge, pleading guilty to a hate crime, but he would not admit that he harbored any hate.

All around him, the adults agreed.

“He will forever be known as the racist kid at Glenelg, but that’s not who Seth is,” his father said in court that day.

“I told him that his act was racist, but don’t let it define him as a racist. He can and I pray that he will go on and do better,” Maxwell Ware, the African American pastor he met with, wrote in a letter supporting him.

It’s such a tired wheeze, there’s even a joke about it. Yes, you spray one racist thing, and you’re a racist. You’ve been a racist all along. It means you trivialize hatred of Jews, gay people, and black people. This is not a hard concept to grasp. These kids are still in denial.

They got a slap on the wrist. They’re “good kids”, don’t you know. Their mothers cried when they got handed weekends in jail and probation and community service.

Six weeks later, Seth backed his car out of his parents’ driveway, headed to his final weekend in jail.

Good behavior during his weekends locked up meant he had to serve only two-thirds of them.

The following weekend, Tyler Curtiss, who had painted two swastikas, would finish his weekends, five in all.

Matt Lipp, whose graffiti attacked Jewish, black and gay people, would serve 11 of the 16 he was sentenced to. He has filed an appeal, still arguing that his First Amendment rights had been violated.

Josh Shaffer, who targeted the principal, was sentenced to the most jail time: 18 weekends. He would serve 12.

All four will be eligible to get the hate crimes expunged from their record when their probation is finished.

Right. The first amendment gives everyone carte blanche to scrawl crude hatred on public property. If you’re white, being racist means you might have some weekends spoiled, but don’t worry, your history will be expunged from their record.

Except that now Seth Taylor, Tyler Curtiss, Joshua Shaffer and Matthew Lipp have their names prominently mentioned in a high-profile article in the Washington Post. Good luck getting that monkey off your back, boys!

Too much truth » « Death will find a way