One of the things I’ve been struggling with this past year has been spider systematics, and it has been frustrating. If I see one more taxonomic revision, I’m going to gag; every attempt to assemble a coherent picture of their evolution seems to be fragile and ready to fall apart. I don’t blame the scientists doing the work, I blame the spiders themselves for being diverse and complex.

However, I have never seen a diagram that so aptly illustrates the chaos of spider phylogeny unironically. 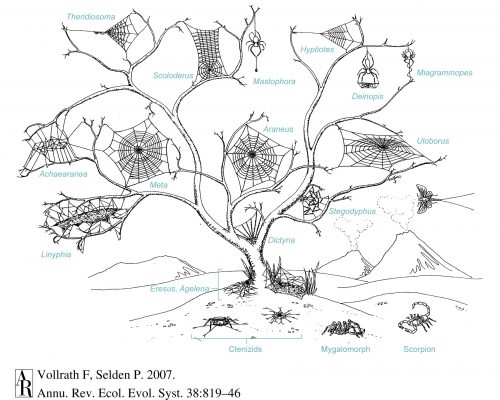 Schema of spider web evolution. A selection of orb web on a tree to demonstrate the various web types—this is certainly not a phylogenetic tree. Distant ancestors such as scorpions and more close ones such as mygalomorphs and ctenizids roam the ground, already using silk to line burrows and construct trip-lines. Further ancestral relatives (e.g., Eresus and Agelena) build their webs on the base of vegetation; a Dictyna web spans the fork of the tree. The right-hand branch contains (in order from its base) the webs of Stegodyphus, Uloborus, Hypotiotes, Deinopis, and Miagrammopes. The center branch holds a two-dimensional araneid orb web by Araneus. The left-hand branch holds a two-dimensional tetragnathid orb web by Meta. This branch also supports (upper left to right) derived orb webs by Theridiosoma and Scoloderus, and the minimalist Mastophora glue-drop web as well as (below on the extreme left) the highly derived three-dimensional webs by Achaearanea and Linyphia (adapted from Vollrath F. 1988. Untangling the spider’s web. Trend. Ecol. Evol. 3:331–35).

Whoa. It’s a schema of spider web evolution that is “certainly not a phylogenetic tree”. OK, what is a “schema” then? You’re using a tree structure as part of an explanatory framework, but the webs are drawn between the branches. How does that work, exactly? How am I supposed to interpret this diagram? What relationships are being elucidated? Am I just too old to be learning new stuff?

Why are there volcanoes erupting in the background?

Otherwise, it’s an informative paper. I’m beginning to think of some of their diagrams as an analogue to how Spider-Man will splat a blob of webbing in a bad guy’s face to shut him up or blind him.

I’m definitely going to have to go to the American Arachnological Society Meeting this year in June, just to hang about with some arachnologists and maybe absorb their attitude by osmosis or something, because I’m mainly just confused.