The same group of people cheering on the destruction of families at the border are also calling for an end to late term abortions — force those women to bring damaged babies to term, even if it kills them both! Pious politicians are crying over the fact that a woman and her doctor might decide to terminate a pregnancy even shortly before it is due, or during labor, as if they just want to kill babies on a whim. That is not the reality, of course. Read this story of a woman who was 35 weeks pregnant when she got terrible news.

The neurologist delivered more bad news: additional brain anomalies. My little daughter would likely never walk, talk, swallow, or support the weight of her head. She would require brain surgery to extend her life, but no surgery could ever cure her.

“What can she do?” I asked. “Does a child like mine just sleep all day?”

He winced at the question. “Children like yours are not generally comfortable enough to sleep.”

She didn’t have much choice.

Why was she offering me these choices? Didn’t she know how deeply I loved my baby? I tried to respond, but could only manage a question, “There are abortions for women like me?” I was 35 weeks pregnant. I wondered if there had been a mistake.

I understood. The doctor who performed abortions for women 35 weeks pregnant had been shot by a man who followed him to his church. Somewhere in my brain, the memory of that news story revealed itself along with the stark understanding that I was entering a world in which people might want to shoot me, too, depending on my choice.

There was only one clinic that could take care of her, it was 2000 miles away, and she had to pay $25,000 up front to get it done. That’s the situation we’re in right now, where essential health care is locked up and hidden away by controlling men and Christian bible-wallopers.

But hey, you want a little good news? The city of Minneapolis has approved the construction of a new Planned Parenthood facility.

The organization will provide all of the same services in the new building that are available in the existing building, including OB-GYN exams and pregnancy and sexually transmitted disease testing, according to Aulwes. The center’s services will include medication abortion. 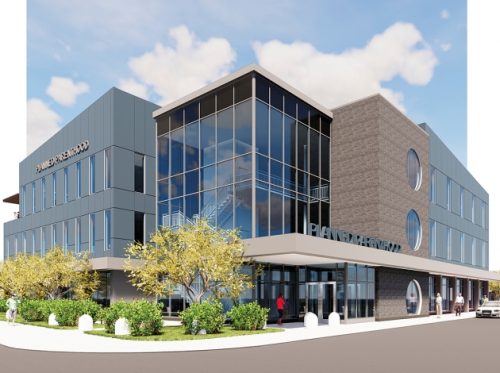 I notice the rendering left out the mob of ignorant assholes with signs screaming at patients trying to get in. That makes it much prettier.

Meme War @UMNMorris! » « Those must be like the imaginary “good genes” that make him very smart