As I was walking through the halls to my lab, I noticed that the students have been waging a little meme war on the corkboards scattered around the building. I haven’t had to work with students much at all this year, so it’s always good to see a reminder of how wonderful they are.

Here’s an example. At the top, just off center, the College Republicans are advertising with the slogan, “Where women are not afraid to be women. While men are not afraid to be men.” That’s an oddly fearful concern — people are not afraid to be who they are in other campus groups. It’s already been defaced, though: someone wrote “bigotry is scarier than human rights” across it. Also they’re surrounded by an “It’s OK to be non-binary” sign and an ad for a discussion in conversational Spanish. Poor babies.

To the right, the College Republicans try again with a sad, limp NPC meme sign. That never worked, people, except in a self-referential way. Your opposition is flamboyantly rainbow-colored, while you’re the boring gray guys. 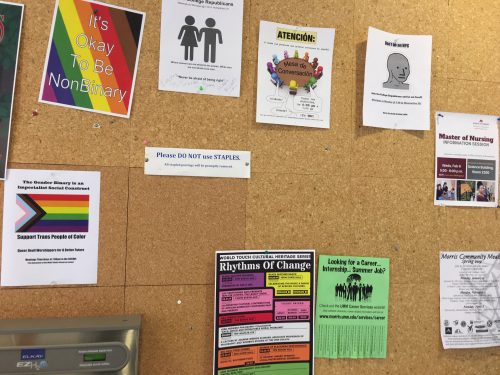 Meanwhile, in response to the trite & feeble sloganeering of the CR, we’ve got…this awesome bit of over-the-top mockery. 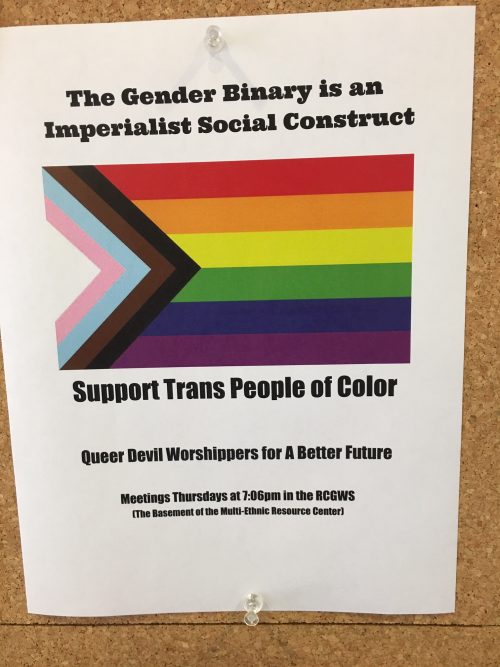 Signed by Queer Devil Worshippers for a Better Future, one of our many progressive groups on campus.

Yes, it’s a real organization. It’s even been written up in the Daily Caller, which seems to be aghast.

“I’m looking to start a Satanist group at Morris to address the budding conservatism on this campus — which I find abhorrent,” student Reed Larsen explained in the email.

“I’m hoping the group will have a social justice platform and further such a platform through good ol’ devilish revelry,” Larsen also said.

Larsen has christened himself as “Vold Mother” of “Queer Devil Worshippers for a Better Future.”

For the group’s logo, Larsen chose a classic, circle-emblazoned satanic pentagram festooned with the rainbow colors of the gay pride flag.

Their response is interesting — it’s an attempt to minimize the influence of the campus conservatives who put up that NPC sign, and also tack up TPUSA crap everywhere.

The “budding conservatism” on the University of Minnesota, Morris campus consists of handful of groups — a gun group, a pro-life club — which boast perhaps two dozen members combined, a source who chose to remain unidentified told Campus Reform.

That’s a generous estimate. I don’t think they take into account that it is the same handful of people signing up for all the conservative clubs, so they may be counting some of them two or three times. Also note how they are cowering fearfully, afraid to be identified…not because there is a serious threat to them, but because someone with blue hair might laugh at them.

Have I ever told you how happy I am to be at this campus? Because I am. It’s a good place. If you’re applying to colleges right now, you should consider applying.

I recommend you choose the side that’s winning the meme war, though.

It’s getting so I’m shy of atheists any more » « Nobody gets abortions because they’re fun, or they hate babies