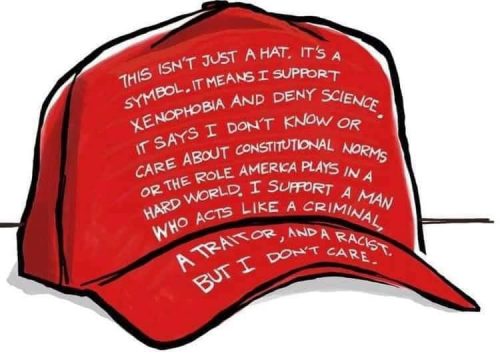 Last week, a group of boys engaged with a Native American man beating a tribal drum. The exchange was caught on video. And watching that video, each of us saw what we wanted to see. Because the divisions in this country are so deep they’re fossilized.

Still, some things in that video cannot be disputed–no matter what angle or how extended the cut is. These boys, who attend a religious school, were there on a school trip protesting against a woman’s right to reproductive freedom. Several of these boys were wearing red MAGA hats, a hat that has become synonymous with white nationalism and racism. Several were doing a “tomahawk chop.” Several were laughing.

When I saw that video, I saw boys flaunting their entitlement and displaying toxic masculinity. It seemed to me like they were reflecting the white nationalism and racism that the hats on their heads have come to represent.

I sent out a tweet that read, “The red MAGA hat is the new white hood.” Right-wing pundits and anonymous trolls alike screamed for my head–literally and figuratively. My husband received death threats on his cell phone. Many demanded an apology.

Here’s the thing: I was right.

Yeah, she was. It’s so obviously true that those hats have come to represent a deep political division in this country that I’m surprised any of the right-wingers are complaining — they should just own their shit. Of course that hat represents bigotry and narrow-mindedness and tribalism and know-nothingness and American provincialism, that’s how Trump got elected. When you see someone wearing that hat, you know from the get-go they’re not going to advocate for tolerance and progressivism, that they despise immigrants, want women to get back in the kitchen and have babies, and have a deep affection for jingo and Fox News.

But I guess the Red Hats at least still have a vestige of shame if they’re trying to lie about their associations.

Oddly enough, red hats have another meaning: The redcap (or Redcap) is a type of malevolent, murderous goblin found in Border folklore. He is said to inhabit ruined castles along the Anglo-Scottish border, especially those that were the scenes of tyranny or wicked deeds, and is known for soaking his cap in the blood of his victims. Seems appropriate.