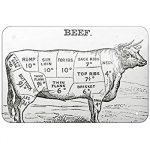 I think I’d pass. Following the lead of the daughter, Mikhaila Peterson, she and her father, Jordan, eat a diet that consists entirely of “beef, salt, and water”, and they never, ever cheat. Well, not exactly. Mikhaila admits I can also, strangely enough, tolerate vodka and bourbon, which is nice — one does wonder what else she can tolerate.

Jordan Peterson admits to also drinking club soda, which, after being told is just water, he feels compelled to clarify.

“Well, when you’re down to that level, no, it’s not, Joe. There’s club soda, which is really bubbly. There’s Perrier, which is sort of bubbly. There’s flat water, and there’s hot water. Those distinctions start to become important.”

Context! Speaking precisely! It’s all very important! What you eat, not so much.

The author of the article asked an expert about the consequences of an all-beef diet.

“Physiologically, it would just be an immensely bad idea,” Jack Gilbert, the faculty director at the University of Chicago’s Microbiome Center and a professor of surgery, told me during a recent visit to his lab. “A terribly, terribly bad idea.”

Gilbert has done extensive research on how the trillions of microbes in our guts digest food, and the look on his face when I told him about the all-beef diet was unamused. He began rattling off the expected ramifications: “Your body would start to have severe dysregulation, within six months, of the majority of the processes that deal with metabolism; you would have no short-chain fatty acids in your cells; most of the by-products of gastrointestinal polysaccharide fermentation would shut down, so you wouldn’t be able to regulate your hormone levels; you’d enter into cardiac issues due to alterations in cell receptors; your microbiota would just be devastated.”

While much of the internet has been following this story in a somewhat snide way, Gilbert appeared genuinely concerned and saddened: “If she does not die of colon cancer or some other severe cardiometabolic disease, the life—I can’t imagine.”

I’m also thinking of the consequences of a lack of fiber, and the strain on your kidneys, and of a 26 year old with severe gout. Beef and alcohol, that’s what you’re going to get. Unless, of course, you’re just like the Breatharians, who claim to live on air and sunlight, yet have regularly been caught cheating.

But he says he never ever cheats! Well, that’s exactly what a cheater would say, and isn’t it odd that he asserted that when no one had accused him of doing so?

I thought this was the meat of the article, the real conflict in what they’re promoting:

The popularity of Peterson’s narrative is explained by more than its timeless tropes; it has also been amplified by the fact that her father has occasionally cast his spotlight onto her story. Jordan Peterson’s recent book, Twelve Rules for Life, includes the story of his daughter’s health trials. The elder Peterson, a psychologist at the University of Toronto, could at first seem an unlikely face for acceptance of personal, subjective truth, as he regularly professes the importance of acting as purely as possible according to rigorous analysis of data. He argued in a recent video that American universities are the home to ideologues who claim that all truth is subjective, that all sex differences are socially constructed, and that Western imperialism is the sole source of all Third World problems. In his book, he writes that academic institutions are teaching children to be brainwashed victims, and that the rigorous critical theoretician is morally obligated to set them straight.

He demands adherence to an objective truth, but happily wanders off into the weeds on the basis of anecdotes. Actually, if you ever listen to his lectures, all he’s got are subjective opinions that spring out of the twisty morass of his brain, so it shouldn’t be surprising that he’s endorsing dietary quackery. What he says has an extraordinarily tenuous connection to what he does.

My daughter is roughly the same age as Mikhaila Peterson. I’m proud of how Skatje turned out sensible and reasonable and living a well-balanced life, although she’s probably not going to get as rich off bunkum with as little work as Mikhaila.

Also, my daughter is a vegetarian, which kind of makes her the anti-Mikhaila.