I remember when I went off to college. I enrolled at DePauw University, a liberal arts college in Indiana. All my life until then I’d lived only on the West coast; it was going to be my first flight on an airplane, too. My family supported my decision, helped me pack the one beat-up, shabby suitcase with about 50 pounds of stuff, and waved bye-bye as I boarded the jet at Sea-Tac. I still remember that I sat on the plane next to a school teacher from Brownsville who must have noticed that I looked rather lost, and he talked to me the whole way to reassure me that this was going to be a great adventure.

After I landed in Indianapolis, I had to find my way to Greencastle, and I had no idea where it was except that there was supposed to be a bus service that could take me there. I stumbled my way around, found the bus, eventually got delivered to the town, and this was what I saw. 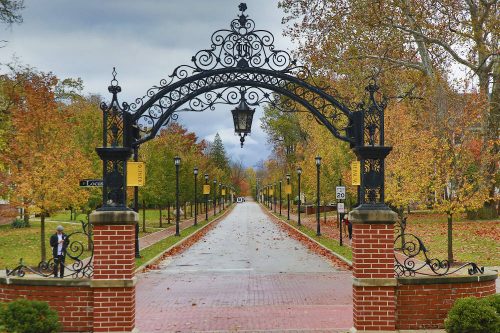 Just picture a scrawny 18 year old standing there, hauling a massive battered suitcase held shut with a belt strapped around it, his arms aching, blisters on his hand, standing there alone with absolutely no clue about where to go. That was me. It was terrifying and thrilling all at the same time. I managed to drag my burdens across campus to the dorm (why did Bishop Roberts Hall have to be so far from the campus entrance?) and began my first year of living independently. I was a totally clueless nerd, but I managed and learned a lot.

So now I’m reading this article about a young student at Bristol University who killed himself in his first year, and I’m sympathetic — that first year is hugely stressful. I was doing new student registration just yesterday, and I saw students in tears because they’re suddenly facing new decisions — “Why do I have to take that class? Oh, no: this class I wanted to take is full! My life is over.” It is hard. Go ahead and cry, I’m not going to hold it against you, I’ve been there myself. But the solution in the article isn’t a good idea.

The father of a student who killed himself is calling for the relaxation of data protection rules that currently deter universities from alerting parents that their child has serious mental health problems.

Nope. I guess some parents just can’t let go, but you have to. The official, legal position of American universities is that we have to abide by the Family Educational Rights and Privacy Act (FERPA), which respects the privacy of the student — they are now independent adults. They can, of course, freely communicate whatever they want to their families. I did! I wrote letters every week or so back home, and this was in the 1970s, no email, long distance phone costs were absurd, and I had to write by hand (we didn’t have printers) on paper and send it by mail with a stamp and everything. But all of my interactions with students are confidential. They’re between the university and the student, even if the parents are paying tuition.

I put three kids through college. I never saw a single report card. I’d ask in a general way how things were going, but it was their choice how to answer me…and they always said “fine”, so I’m pretty sure there were dramas and anxieties and struggles they weren’t telling me about. That’s the way it goes. This ain’t kindergarten anymore — these are adults, taking their first steps forward. Let ’em go.

I occasionally get concerned parents who ask me what their student’s grades are in my class — I tell them no, ask them, not me. I’ve had parents show up at my office door, very worried about whether their student will graduate, and I tell them the same thing. In one case it was tough, because the student was actually blowing off all their courses, had dug themself a very deep hole, and was not going to graduate for sure…but that’s not their business. What can a parent do in such a situation? Yell at them? Cut off their funds? None of that helps solve the problem. I sent the student off to talk with advisors in our learning center instead.

But, you’re saying, this Bristol student killed himself. Yeah, and what is the parent going to do? I would assume they have been giving their unstinting love and support all this time, but the student is still struggling. They don’t need mom and dad, they need professional help. If I were informed by a parent or a peer or observed a student flailing, I wouldn’t call the parent: I’d call a counselor (we have trained experts in this sort of thing), or a dean or take it all the way up to the chancellor to get them help. Parents aren’t usually trained in clinical interventions.

Also, terrible as it is to say, some parents are the problem. I’ve seen everything from neglect and abuse to those high-pressure parents who are the ones applying the most strain to the students’ sense of self-worth and identity. I usually don’t know. I’m not going to contact someone who is a stranger to me and is unlikely to have the specialized skills to deal with, for instance, depression or an identity crisis. Yeah, like I should call a parent and say, “Your son has discovered he’s gay, thinks he’s going to hell, and just broke down in tears in my office. Could you come take him away?”

The father here blames the university. He thinks the cause of the suicide was a sense of failure because he didn’t get into his first choice university.

Murray believes that sudden change of plan and narrowly missing out on Edinburgh made his son vulnerable. “He loved Edinburgh. We had been there many times,” he said. “A sense of not succeeding becomes a sense of failure. I think that’s what Ben was carrying with him going to university. To take your own life you have to be in extraordinary mental pain.”

Ben told his family he was enjoying university, but they discovered after his death that he had struggled to engage with the course and had missed lectures and exams. Murray said his son had informed the university he was suffering from anxiety and he was sent a link to support services.

He killed himself a few days before he was due to leave Bristol at the end of a formal withdrawal process.

And there’s the problem. Ben Murray was in contact with his family, and chose to hide his problems from them. That was his choice. His father now wants the university to change their policies and inform the family of difficulties against the student’s desires. There may be a very good reason their son didn’t want to discuss these issues with his parents; if we go against the wishes of an adult student, unaware of the full situation, we could make the problems worse.

It is worth noting that Ben Murray was more willing to inform the university of the problems than he was his parents. That’s a decision that should be respected, and that we are obligated to respect, and he made that choice. You could make a case that the university should have done more — sending a link to support services is kind of impersonal — but the more appropriate response would have been to set him up with appointment with a trained counselor, not to go running to the people Murray was avoiding.