Over at Nice Mangos, she posts about her perspective on movement atheism.

It’s quite depressing that movement Atheism has turned into such a joke. I valued it so much once.

This unraveling of the movement and it’s leaders has been tough to come to terms with. Especially for those of us who have already done this bit before…wrestled our beliefs, questioned respected leaders, lost community for it, and so on.

I had noticed a troubling turn 2-3 years ago. The questions in my mind became harder and harder to ignore when Rubin arrived on scene. He really brought the hypocrisies to the surface.

My personal, recent last straw was the treatment of the Krauss thing generally among movement leaders….and the Ezra Klein/Harris convo, the utterly obvious flaws in thinking. That was really it for me. No looking back and hoping former heroes come to their senses.

OK, that’s eerie — it’s the same scene, only about 5 years later, with different players. I noticed the “troubling turn” about 8 years ago, as more and more atheists began to rally around two themes: the Glorious Leaders who were fonts of inarguable Reason & Logic, and a definition of atheism that exempted them from all social responsibility or ethical obligation. The other big difference was that unlike Eiynah, I resisted criticizing with the excuses of #NotAllAtheists and they’ll outgrow the regressive social tendencies if we just keep trying. I was wrong. And it is quite depressing.

At least I can really love this portrayal of the shambles movement atheism is in right now. 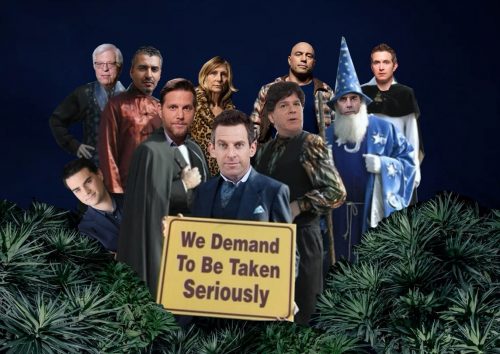 Where’s all the energy of atheism going? Right into the pockets of those jokers, many of whom are openly anti-atheist.