Crap. I’ve already got to add another one to the list of things other than guns to ban. So we’ve got:

That last one is prompted by this headline: 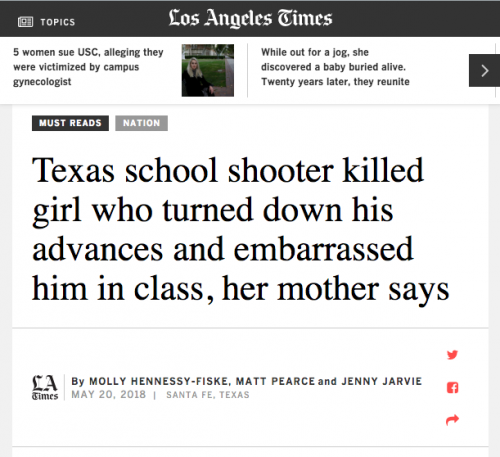 As Libby Ann points out,

We live in the era of #metoo. In an era of #metoo, such headlines should be unacceptable. She turned him down, she embarrassed him. Not he stalked her, he grew more aggressive in has advances until she defended herself the only way she could, by publicly calling him out.

One of Pagourtzis’ classmates who died in the attack, Shana Fisher, “had 4 months of problems from this boy,” her mother, Sadie Rodriguez, wrote in a private message to the Los Angeles Times on Facebook. “He kept making advances on her and she repeatedly told him no.”

Pagourtzis continued to get more aggressive, and she finally stood up to him and embarrassed him in class, Rodriguez said. “A week later he opens fire on everyone he didn’t like,” she wrote. “Shana being the first one.”

Every teenaged girl in the country is going to get the message the asshole shooter sent: I’m gonna get really mad if you turn me down, and shoot up the whole classroom…and the LA Times will shame you.

This is going to fit in really well with the new Incel Agenda and Forced Monogamy plan.

Get out of my head, Eiynah! » « They’ll do anything to avoid regulating guns